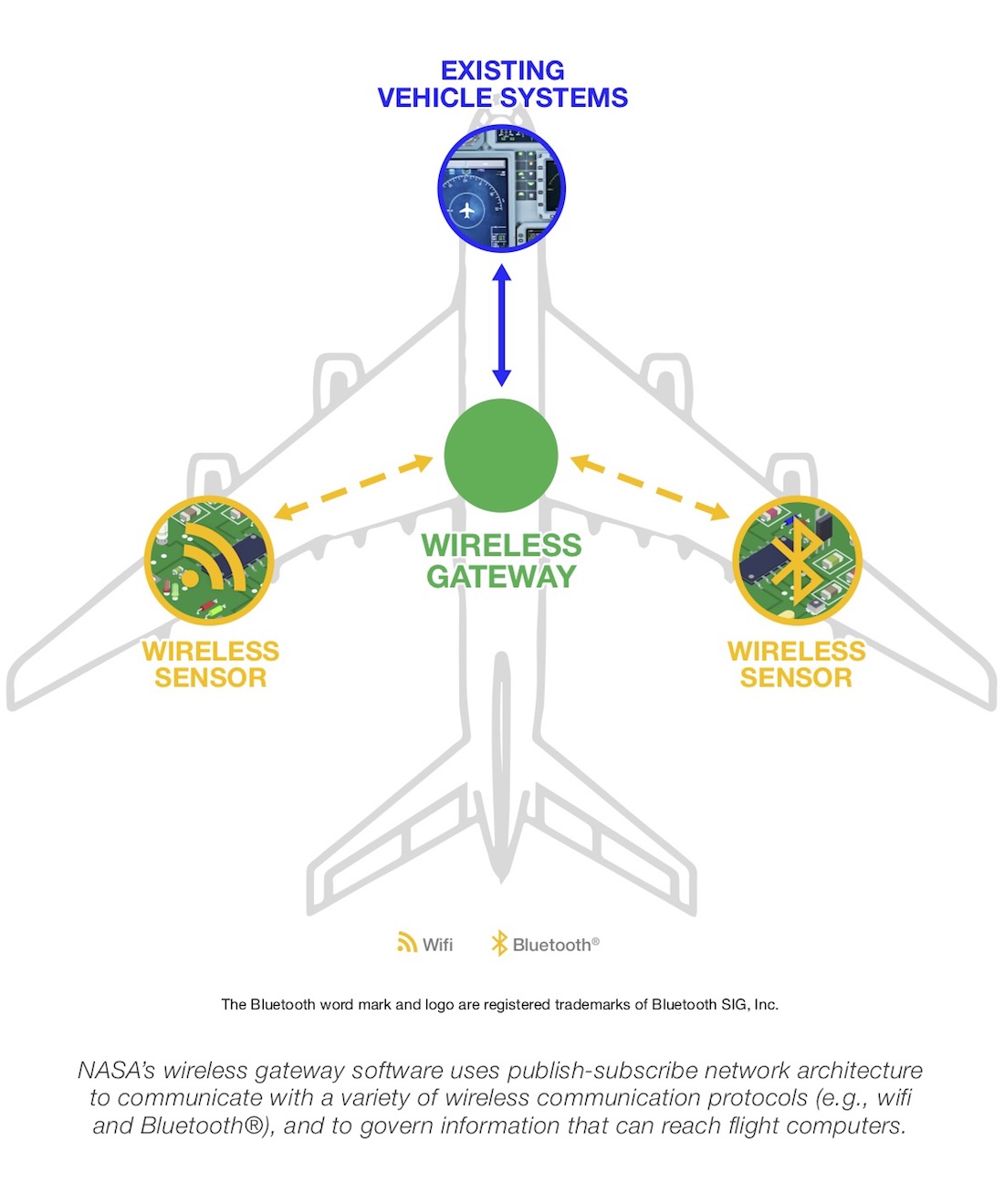 Despite the promise of wireless avionics systems, they have yet to gain mass adoption throughout the aerospace industry. Innovators at NASA’s Armstrong Flight Research Center realized that the core of the issue was that any avionics system would need to be physically modified to incorporate new wireless capability.

The answer: A single universal wireless access point or “gateway” that can be reprogrammed to communicate with any wireless device. With a gateway, new wireless capability can be incorporated into onboard systems entirely through software modifications, allowing engineers to seamlessly integrate new wireless sensing technology onto a vehicle “at the speed of software.”

How It Works: The gateway uses a software defined radio (SDR) to control the flow of information between various wireless devices and a vehicle’s avionics. An SDR can be reprogrammed to communicate with a variety wireless communication protocols and frequencies via straightforward software modules, as opposed to wireless sensor-specific hardware, effectively eliminating the need to modify a vehicle’s existing avionics hardware architecture.

The gateway employs publish-subscribe network architecture. Before takeoff, flight computers request—or subscribe to—specific pieces of information from the SDR gateway. Wireless sensor devices then provide their respective sensor measurements to the SDR gateway, where they are distributed—or published—to any flight computer that has subscribed to a specific measurement.

This architecture simplifies the process of designing wireless avionics networks by providing a single point of communication between wireless and wired systems, functioning as a layer of abstraction between wireless sensors and the system with which they interface. This approach also ensures that no wireless device
can directly communicate with a flight computer unless subscribed prior to takeoff, thus protecting the system from malicious or errant transmissions.
Innovation Benefits: Converging wireless technologies into a single platform offers many benefits:
• Rapid integration: Wireless sensors can be integrated much more quickly than hardwired options.
• Improved capabilities: The gateway facilitates the use of cutting-edge wireless sensors by creating an off-the-shelf integration mechanism.
• Streamlined industry infusion: Once proven on a research vehicle or platform, a wireless sensor can be immediately integrated into commercial aerospace vehicles.
• Reduced weight: Eliminating cabling offers dramatic weight reductions, enabling transport of more profitable payloads.
• Lower costs: Reductions in cabling combined with decreased integration efforts make the wireless approach enabled by this gateway more economical.

Applications: Although the gateway was specifically designed for aerospace systems, it is platform- and implementation-agnostic, with the potential to foster similar convergences between wireless technologies and other industries, such as infrastructure, automotive, manufacturing, and the Internet of Things.

Production: Access to this approach is straightforward, as SDRs are readily available. The Armstrong-developed software is simply integrated with an off-the-shelf SDR to create the gateway system.