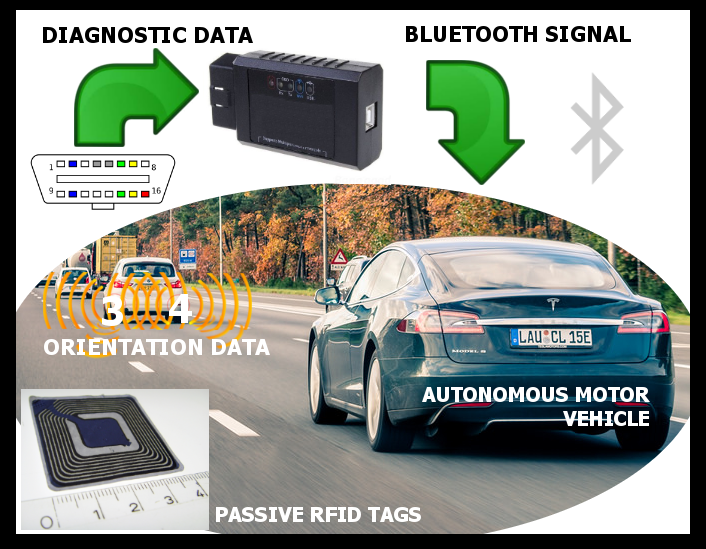 Current autonomous systems planned for introduction into public and private transportation rely on the system itself obtaining all the information on its surrounding environment through its own internal sensors and control sub-systems. To minimize external sensor infrastructure cost and maintenance requirements or use of active communications with autonomous systems, development has typically been focused primarily on improving the user interactions, safety and the overall quality of the autonomous system and its internal sub-systems themselves. An RFID/Bluetooth/Wireless sensor package that is installed onto any of the millions of already existing motor vehicles can help fill the hole left by a lack of supporting sensor infrastructure and provide added data for any autonomous or even semi-autonomous motor vehicle to utilize in its control and response algorithms.

Sensor packages can consist of up to two levels of vehicle data input support for autonomous motor vehicles; Vehicle Orientation and Location Support, and Vehicle Performance and Behavioral Support. The first level of support utilizes a set of passive small 2-3” RFID adhesive sensors that are highly affordable to produce and are placed on key locations around a vehicle. The tags transmit a pre-coded ID, which indicates each tag’s location on the vehicle; front-left, rear-left, etc. As an autonomous vehicle approaches a vehicle that has these tags installed, it reads the IDs of the tags as they come into range. The autonomous system can then make a better estimation of the vehicles orientation and location relative to itself and cross reference with its own internal sensors to provide a more robust understanding of its surrounding environment.
The second level of support utilizes a Bluetooth/Wireless accessible module that plugs into the diagnostic interface that vehicles have available. The module accesses vehicle data such as model information, speed, user inputs i.e. cruise control, turn signaling, brake/gas pedal use and overall vehicle health. An autonomous vehicle would have access to what nearby module equipped vehicles physically are and what they are actively doing. This added data can be used in the numerous calculations and processes required to function autonomously. When combined with the RFID system, an autonomous vehicle has a complete map of what nearby vehicles are and where they are regardless of their autonomous and technical levels.

These packages would be purchasable by a consumer willing to provide information to autonomous vehicles on their own vehicle’s location and performance while on the road. Potential incentives provided by the producer, regulatory bodies or insurance providers could drive the interest of millions of consumers to passively reduce risk to themselves while simultaneously supporting autonomous development, increasing overall safety and quality of existing and future systems on the road. Incentives would not be limited to the consumer. Bringing the public into the development cycle reduces the necessary development processes and costs producers would need to place within and external to their systems to accomplish the same level of autonomy. This incentivizes producers to support developing their systems to work with the sensor package manufacturers, regulators, and insurance providers.