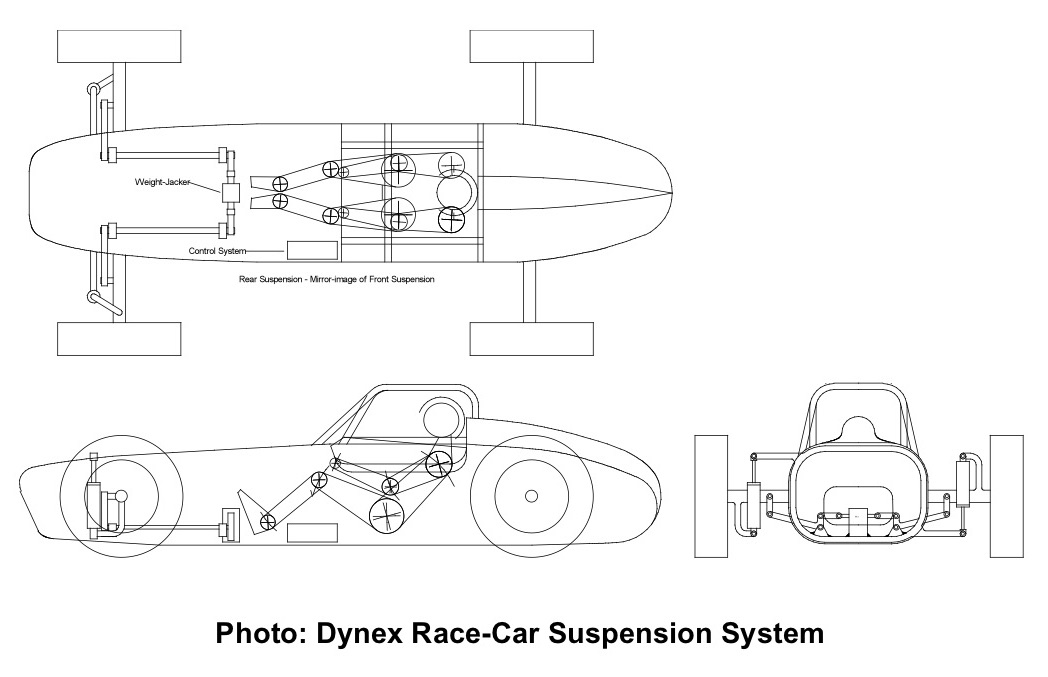 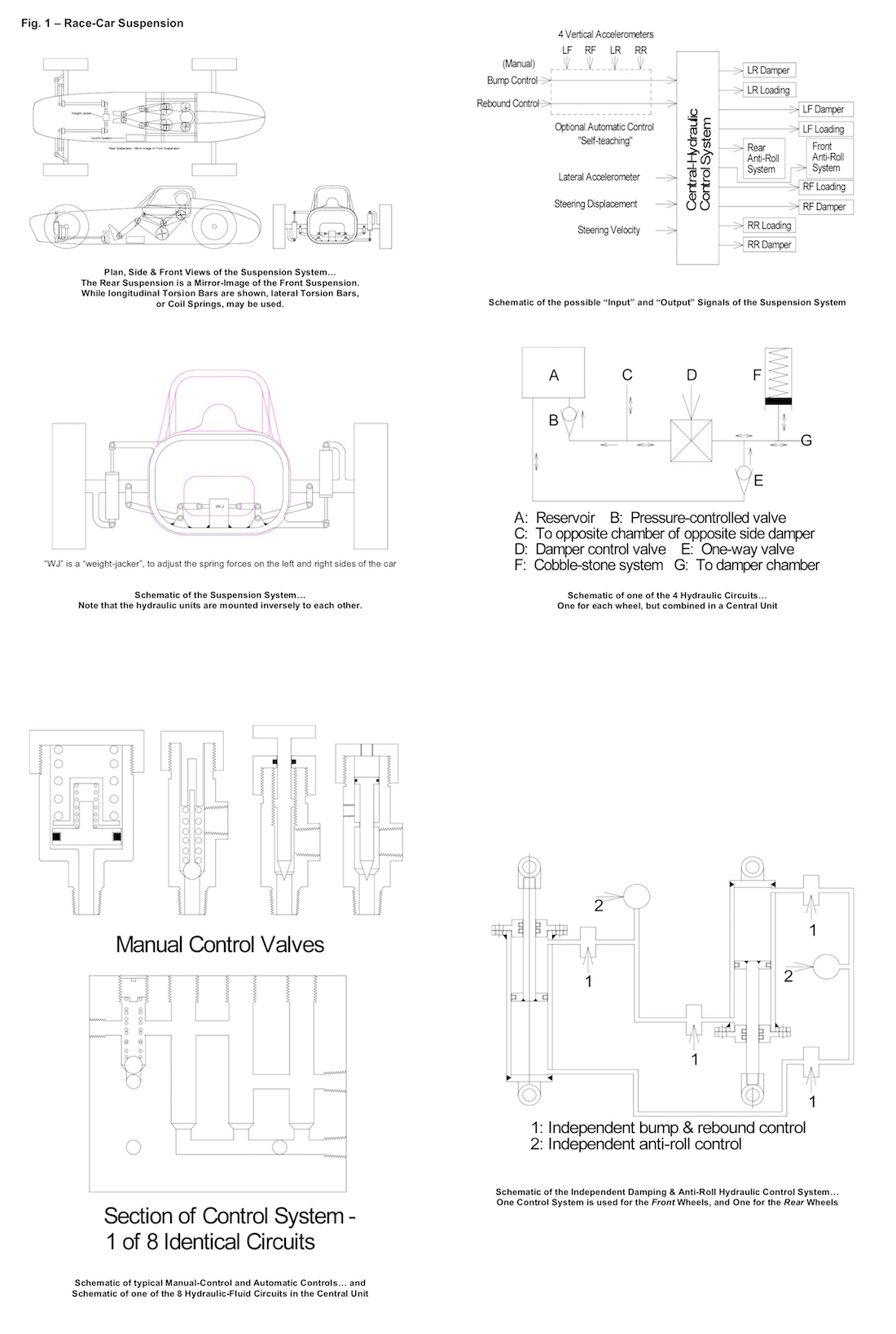 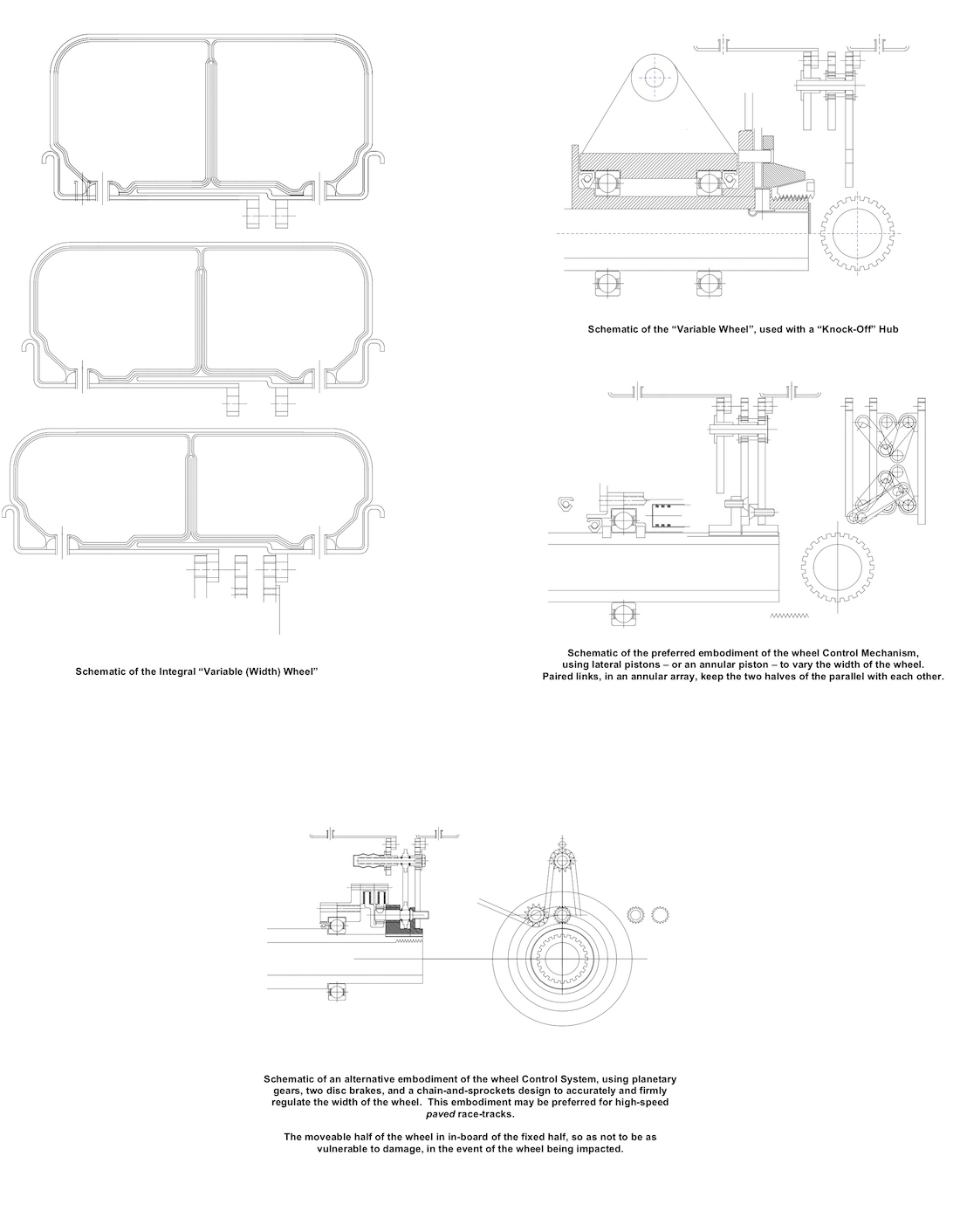 The invention is a "central-hydraulic" suspension system that has major advantages regarding the control of the prime suspension parameters, so as to provide superior road-holding and handling.

The system allows the front and rear roll-stiffness, and the bump and rebound damping characteristics of each wheel to be independently adjusted. The "handling envelope" - or "cornering force v. under-over-steer" curve for the race-car can be quickly refined continuously to suit the track conditions and driver preference.

Without using mechanical anti-roll bars, the front and rear roll-stiffness can be separately regulated - by connection to the steering - so as to prudently control the handling characteristics.

The system provides individual adjustable damping of all 8 wheel movements (LF/RF/LR/RR - up & down). Likewise, it also provides adjustable spring loading on each wheel, via a hydraulic “weight-jacker”.

An integral part of the invention is effectively a “variable-diameter tyre”. This “re-invention of the wheel” (literally) provides a major improvement in the handling and cornering speed and stability of race-cars, especially race-cars that do not have a differential.

Correctly speaking, it is a variable-width wheel, which allows the diameter of a driving tyre to be selectively varied - between pre-set limits - so as to provide the optimum amount of “stagger” during cornering, yet allows both driving tyres to have the same, or nearly the same, rolling- diameter on the straights. This stops the tyres from “fighting” each other.

The drawings show the principle of the variable-width-wheel / variable-diameter-tyre concept. The cross-sectional area of the tyre never changes appreciably, but the section height (hence rolling radius) and width can selectively be changed, depending on the radius and camber of each corner… on a straight, both, or all, driving tyres are close to the same diameter.

The wheel is very robust so as withstand severe road bumps, and contact with other race cars. The outer “half-wheel” is normally fixed solidly to the “live” axle; the inner “half-wheel” is selectively moveable laterally along the axle. The assembly has two inner tubes, to prevent “pinching”.

The wheel assembly can be quickly changed during pit stops. Tyres must obviously be of such a design and construction that the effective “rolling-radius” can physically vary, as desired.

Different wheel variants (design details and materials) may be used for paved (asphalt) and dirt (clay) tracks, and for different shape (radii and banking) tracks. While intended primarily for (oval-shaped) speedways, the invention may also be used on race-cars competing on “road” courses.

The movement - up and down - of each wheel may be monitored, either visually or electronically, using a conventional cable or potentiometer system. Adjustments to the hydraulic control system can be made - either manually or automatically - so as to endeavour to reduce the amplitudes of the vertical movements of the wheels.

An electronic signal may be used to “set to zero” the control monitoring system, at a certain position of the race track, such as the start-finish line.