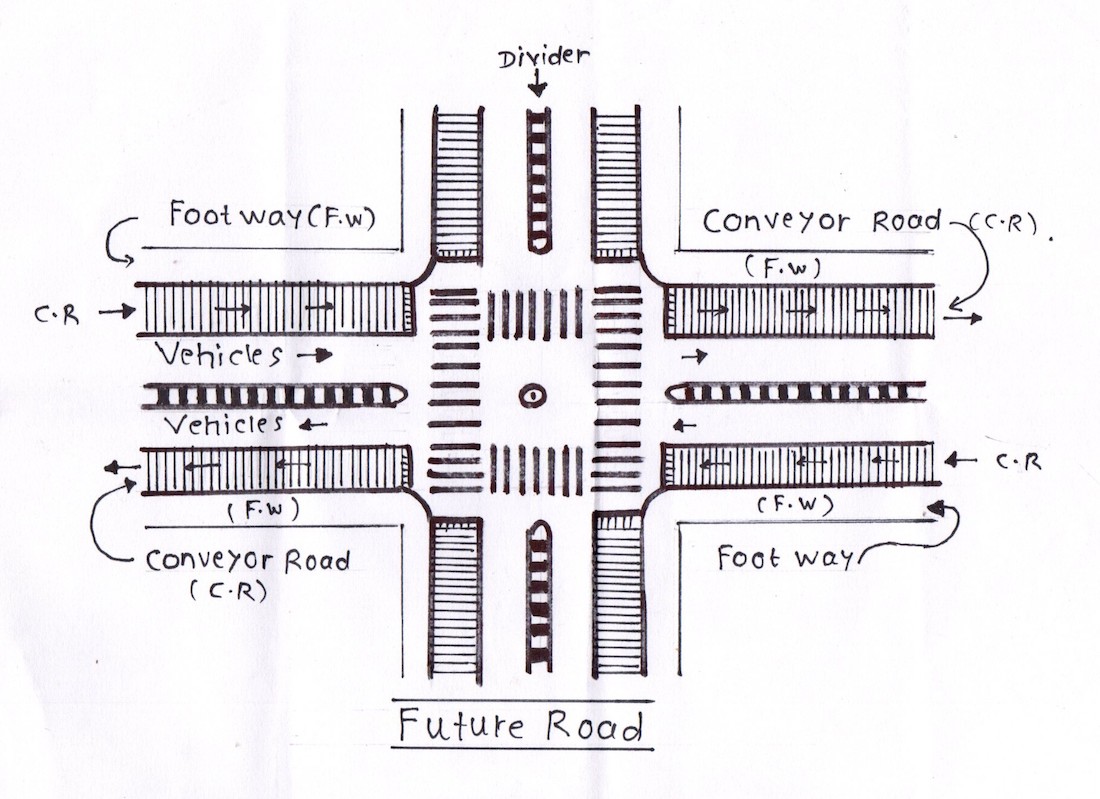 With increase in car, bike and automobile industry all over the world and more demand for petrol and diesel in industrial use, in the future there would be acute shortage of the petrol and diesel by the year 2050. Many countries are already planning for zero emission to curb carbon emission by 2050 to tackle global warming and green house gases. Solar powered cars and electric cars have their own limitations such as speed and maintenance.

We thought instead of making new alternative fuels like gas, electric batteries, solar energy etc. for cars, buses and other transport vehicles why not to focus on moving roads? To support zero emission and curb carbon we suggests an idea for future road design. In most big cities there are long and straight stretches of roads with multiple lanes. In our design it is suggested to convert one lane usually close to path way or foot path to a conveyor road. Like conveyor belts in international airports. These conveyor roads would be operated by electrical power or solar energy. Such roads will be very much useful for the senior citizens, pedestrians and peoples for their commuting to shops, clinics, nearby distances etc. Seating arrangements can also be made available for the comfort. Such conveyor roads may reduce the use of local transport, car and other vehicles, and ultimately decrease the petrol and diesel consumption.

It is clear from the design that such conveyor roads will continue even at the road crossing. Only thing is that peoples have to use zebra crossing to cross the roads and continue on conveyor road. Such arrangements won't disturb existing road arrangements as some traffic will continue as usual from road without any disturbance. Peoples can use foot path as well for walking purpose.

In the future most of the common people will avoid personal transport such as car and other vehicles due to price hike or shortage or non availability of fuel. This will add up additional burden and crowed on local public transport on both local trains and city buses. In view of this the idea of proposed conveyor road design may be likely to be effective, comfortable and faster considering heavy traffic jams by the year 2050. This is just an idea which can be easily implemented as conveyor belts are already in use.