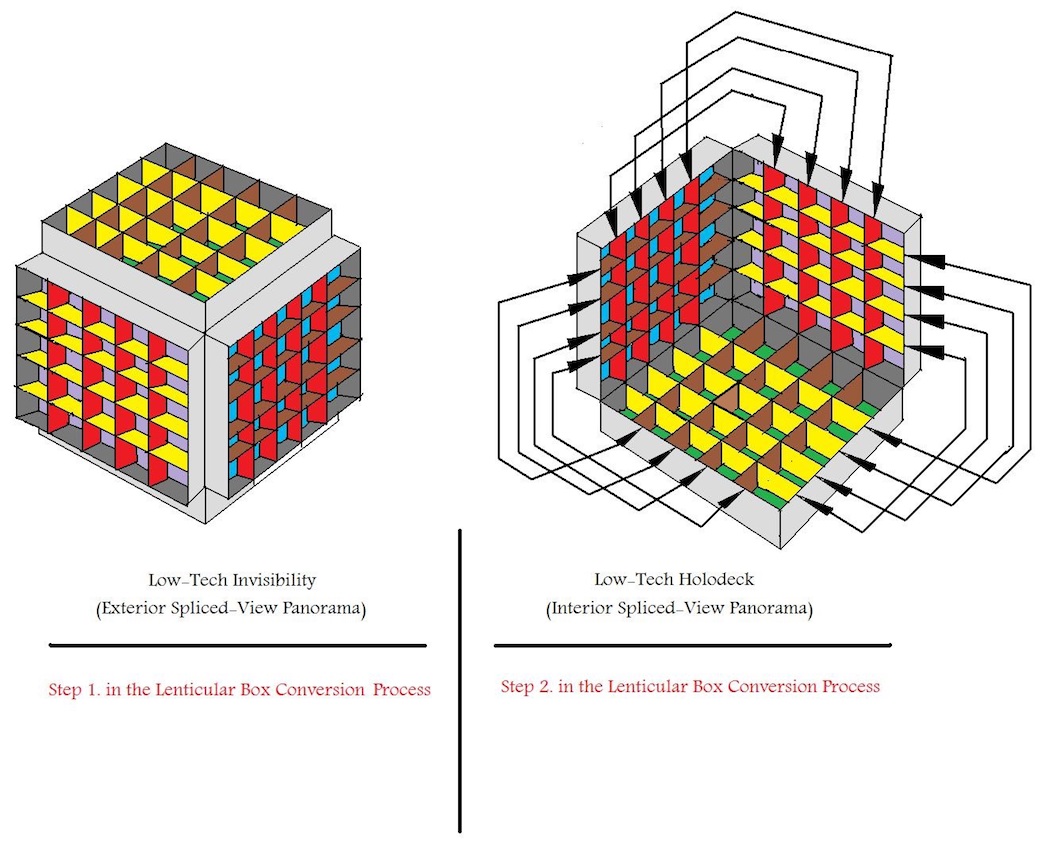 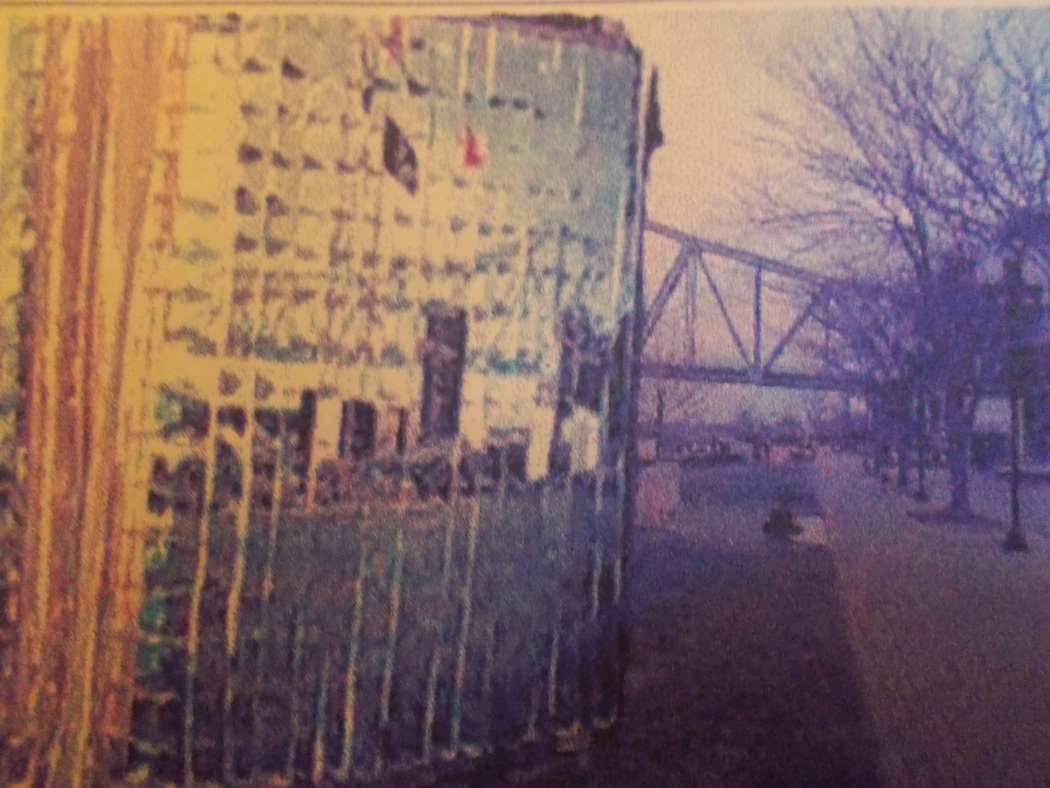 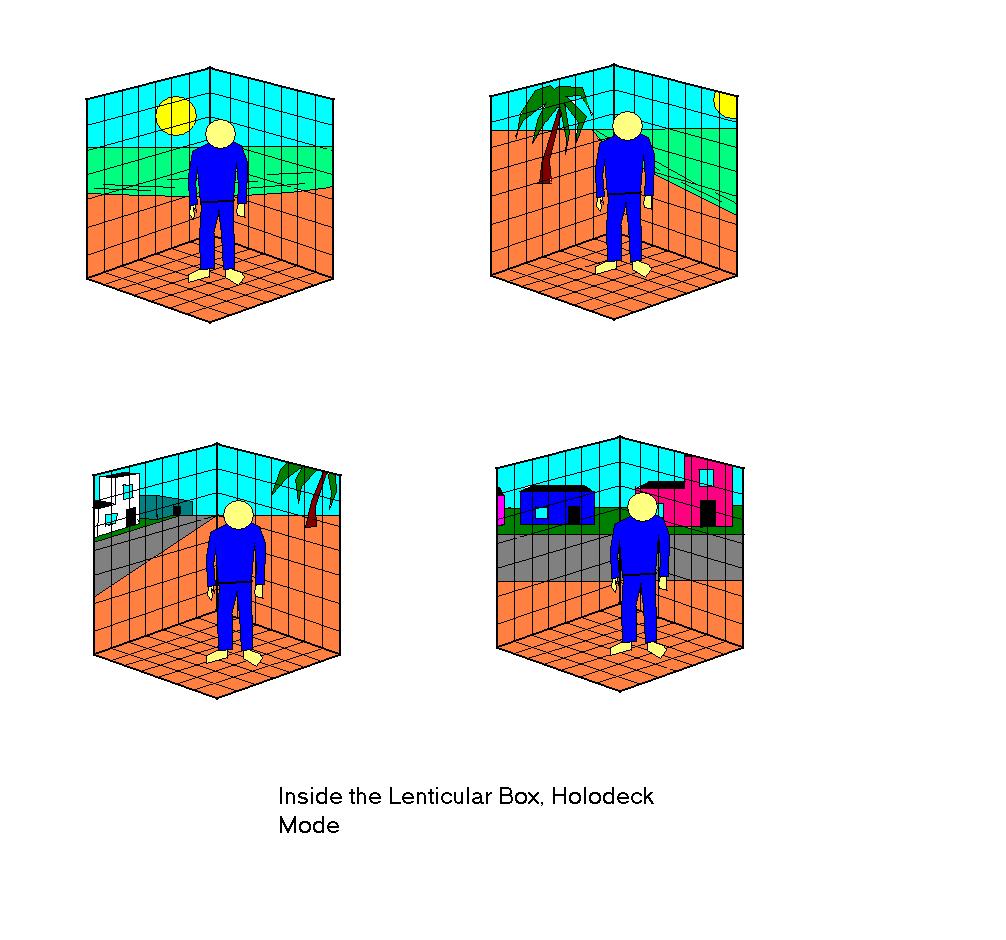 I came up with my Lenticular Box as a low-tech geometric photographic proof of the inverse relationship between invisibility and holodeck technologies that can be applied to a high-tech scenario in the form of my Light-Interface concept and resulting Light-Interface System.

I've had my original Lenticular Box online since at least August 2nd 2002, and I have proof. There is a similar knock-off of my box that I found while Googling called the " Lenticular Curtain", which merely takes advantage of only the horizontal axis of rotation, although my box has three axes of rotation in total.

The images illustrate an 18 viewing angle Lenticular Box, made up of 30 required square measure pictures with six flat faces to a typical box and 12 edge-on viewing angles where a pair of pictures come together for one larger image at that angle.

A complete Lenticular Box would include the 8 corner angle views and produce a total of 26 viewing angles ( picture not shown, lack of space).

A typical box or cube has six faces, twelve edge-on views and eight corner views for the maximum number of views that can fit symmetrically on my original Lenticular Box, with a 3-D cubical cell resolution of 9 and 26 total viewing angles around or inside a Lenticular Box, either in low-tech invisible or low-tech holodeck modes of operation.

By following my inverse diagram, you can use the same pictures that made it blend into its environment and produce a holodeck interior of the same scenery that was depicted on the box's outside exterior manifold surfaces.

My Lenticular Box is low-tech and photographic, it high-tech counterpart, my Light-Interface System would be televisual.

A female friend of mine also thought that a selling feature of my Lenticular Box may include adorning the exterior faceted manifold surfaces with various images of the Harry Potter film franchise or various imagery of Disney princesses, if making money was an objective to tie into a popular marketable theme, but I simply see my Lenticular Box as the low-tech geometric visual proof of my Light-Interface System on the high-tech level of operation.

I am current buy 7x7 foot square murals of my town's Old Smothers Park, from before it was torn down to make way for our new park to build a room-sized Lenticular Box in low-tech holodeck mode ( pictures not shown). I hope to have it complete and unveiled by Christmas Day 2018 and donated to my town's science museum or our city's parks department.