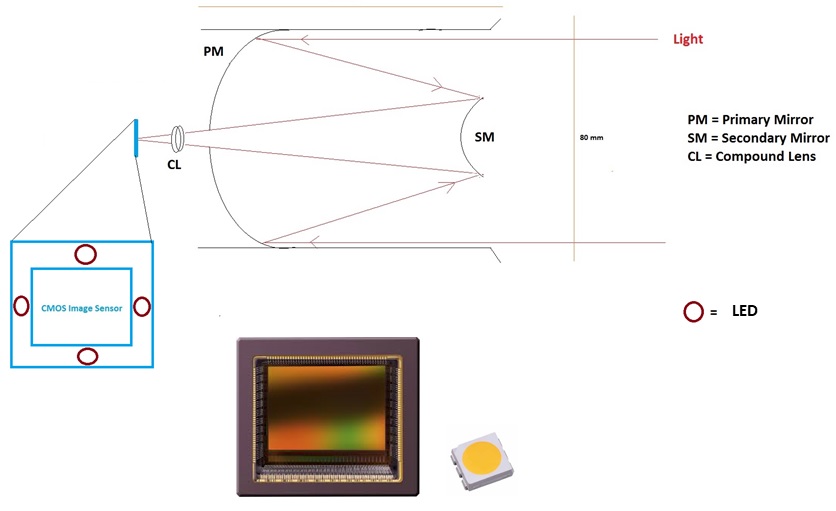 Light Communication is a new wireless communication technology, where data is communicated in the form of light. It has benefits of interference-free communication, increased bandwidth & data rate and license-free operation. LED/LASER is used as light data transmitter and photodiode/phototransistor is used as light data receiver. CMOS sensor in camera can be considered as an array of phototransistors which collects focused incident light and converts it into an image on the sensor. In a similar manner, CMOS sensor can be used to capture light data and function as a light data receiver. The same focussing mechanism when used in reverse order functions as a diverging mechanism. LED array placed in this diverging plane will produce a diverged light data beam. In this research proposal, a CMOS sensor, LED array and a focusing mechanism is customized to design a light communication transceiver. The proposed transceiver is targeted at low data rate input and high data rate output applications.

A 200 mm long and 80 mm diameter barrel camera for use in light data communication will be designed. It comprises of a 2048 × 2048 RGB CMOS sensor with 5.5 µm pixel size, a focussing lens arrangement to achieve 360 mm focal length, LED array with 5000 lumens output and an electro-optic beam reflector. LED modulated with binary data will illuminate the barrel camera which will capture the image of the LED as well as receive the binary data. An acknowledgement binary data will be sent from the barrel camera back which will be captured by a photodiode with parabolic reflector.

There are three hypothesis models to be tested:
1) A camera to be used as a light sensor.
2) CMOS sensor to capture incident light data as images and extract the binary data by processing multiple images at a faster rate.
3) A focusing lens in a catadioptric structure to work as a diverging lens when reversed.

The following experiments are to be carried out:
1) Characterization of CMOS sensor to measure its light sensitivity.
2) Using suitable electronic processing system to measure the time required by CMOS sensor to capture an image, thereby calculating image acquisition rate.
3) Using a focussing lens to validate the optical design parameters and to do design optimization.
4) Check the operation of electro-optic beam reflector.
5) Reversing the focussing lens to study its divergence characteristics.
6) Using the designed camera for light transmission and reception.

The significance of the proposed research can be immediately seen in space communication and marine communication where radio spectrum availability, licensing and bandwidth are major issues. The novelty is that same module can be used as both transmitter and receiver. Specifically in marine communication, the infrastructure is easier to set up in midsea. Also, under water communication is highly feasible. The proposed technology can be extended to medical applications, where radio and microwave frequencies are still prohibited.