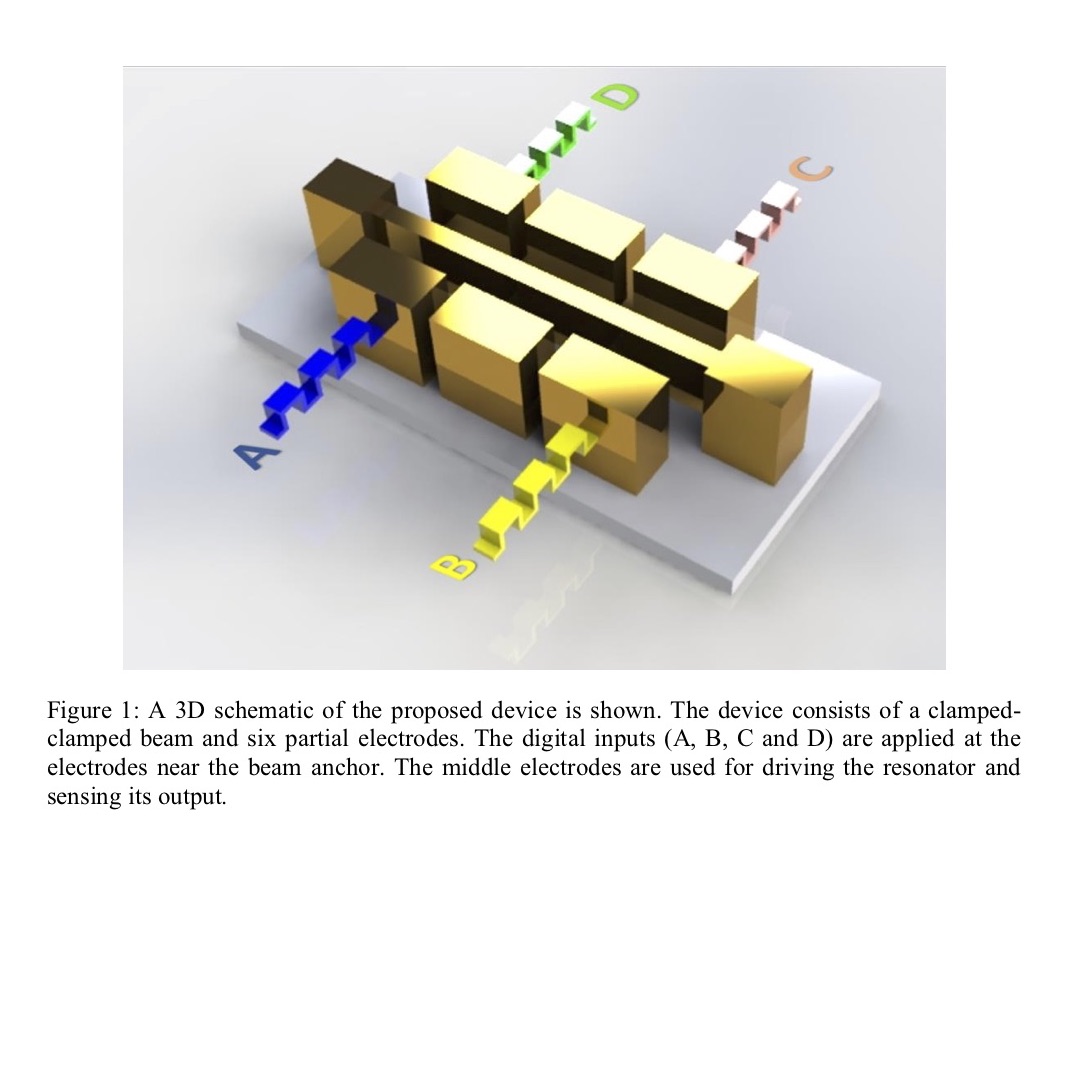 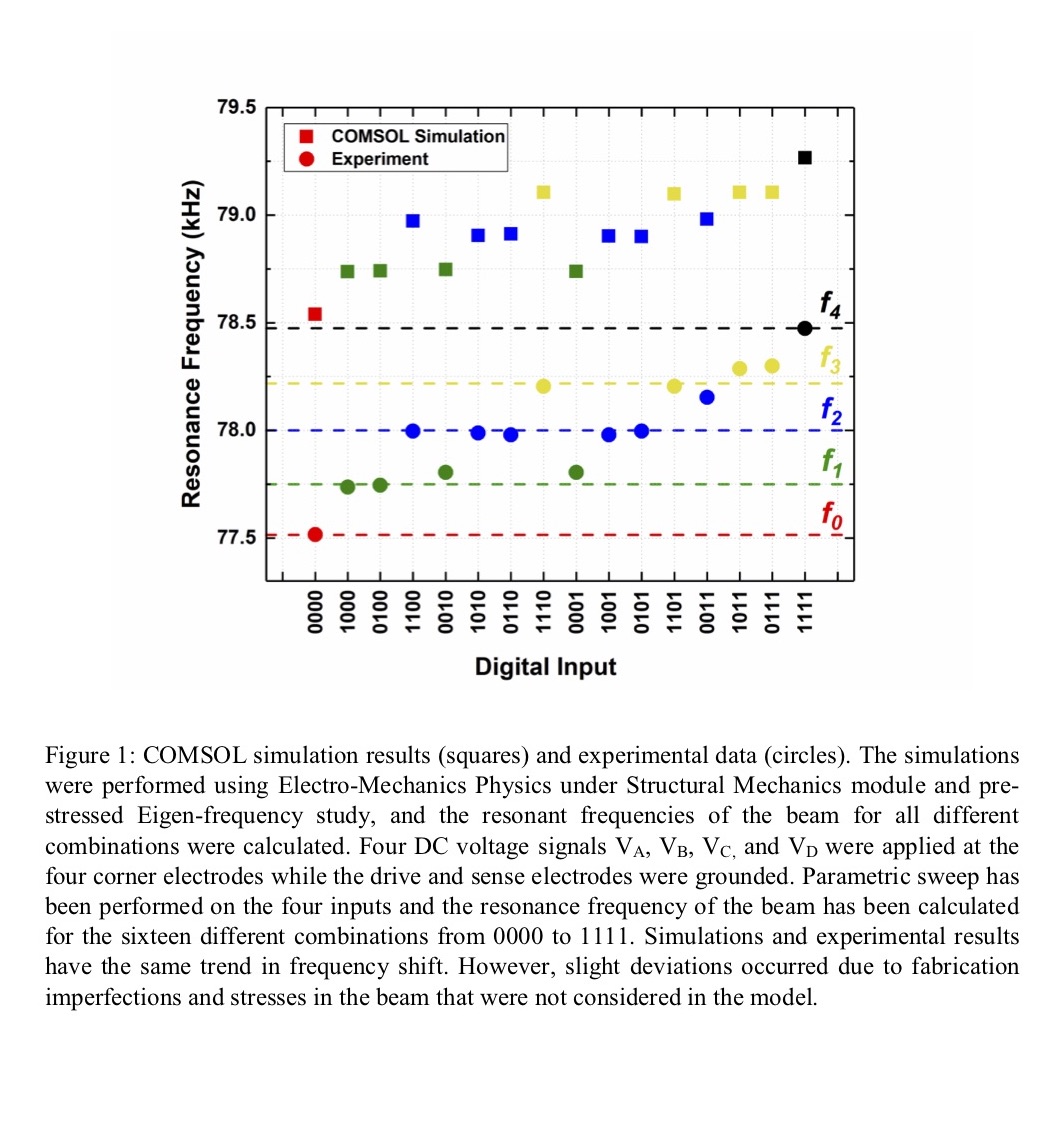 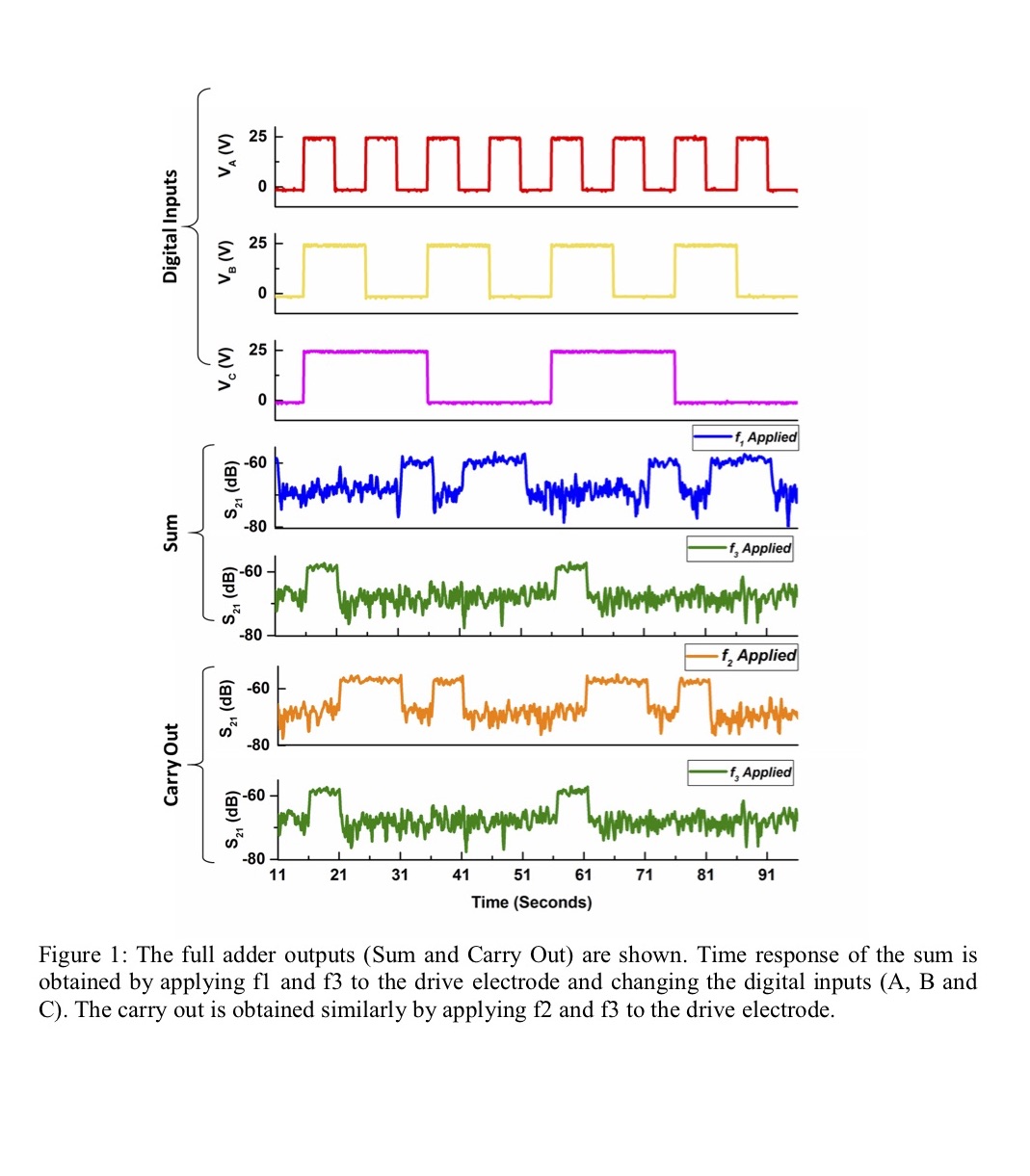 In the Internet of Things era, electronics with ultralow power consumption are greatly sought after. In order to implement a microprocessor, basic logic gates and computing blocks are required. We propose a run-time reprogrammable micro-resonator-based device that can be used to implement a compact, reprogrammable multi-input logic gate and also the most compact full adder block ever presented.

The proposed proof-of-concept device consists of a laterally actuated doubly-clamped micro-beam, biased with a DC voltage, with three fixed identical electrodes on each side of the beam, in which the logic inputs (DC voltages), applied at the four corner electrodes, electrostatically tune the resonance frequency of the beam. The middle electrodes are used for driving the resonator and sensing its output. The logic one is defined as the “on-resonance” signal, while the logic zero is defined as the “off-resonance” signal. We found out that the digital inputs containing the same number of ones (n) result in the same resonance frequency for the beam (fn). For four inputs, we have five different resonance frequencies corresponding to five different cases: all zeros (f0), single one (f1), two ones (f2), three ones (f3), and four ones (f4). COMSOL simulations were performed to optimize the design and the required DC voltage for proper separation of the different states.

In order to realize a 4-input NOR gate, which is a logically complete gate and can be used to implement any logic function, an AC signal with frequency f0 is applied to the drive electrode. In this case, only the-all-zeros input state will set the resonance frequency of the beam to f0 and create a high output signal (on-resonance). The rest of the input combinations will shift the beam’s resonance frequency to values different from f0 and will result in a low output signal (off-resonance). Similarly, applying the frequency of all-ones case (f4) to the drive electrode will program the device to work as a 4-input AND gate. Therefore, one micro-resonator device can be run-time reprogrammed to do the function of 8 transistors (for standard CMOS NOR gate) and 10 transistors (for standard CMOS AND gate), which significantly reduces the complexity of digital circuits.

To implement the full adder device which has two outputs (sum and carry-out), two identical micro-resonator devices are used. The sum output is implemented by applying two frequencies to the same device (f1 and f3), as the sum output is high if the input contains an odd number of ones. Similarly, for the carry-out, two frequencies f2 and f3 are applied to the drive electrodes. This technique reduces the complexity of the digital logic design significantly; as an example, for a 64 bit adder, only 128 micro-resonators are required, compared to more than 1500 transistors for standard CMOS architectures. Therefore, the area of a single bit full adder using the proposed technique can be reduced by 97% compared to a single bit mirror adders using 65nm CMOS technology with energy/operation in femto-joules and moderate operation speed up to 1 MHz.