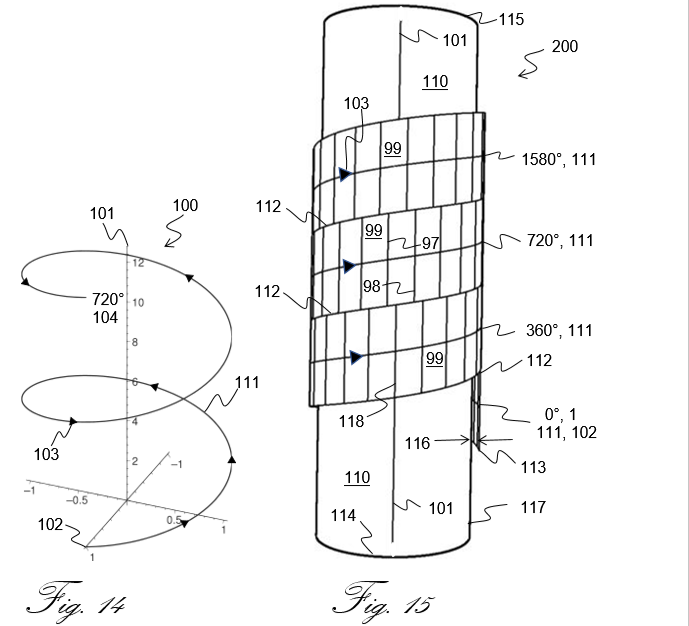 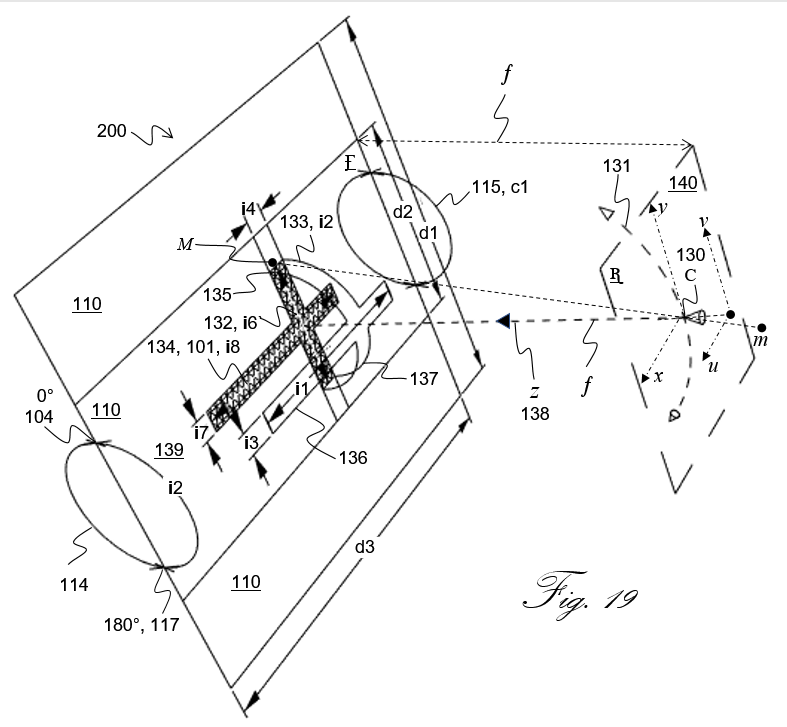 This invention teaches prior art of bendable, rollable, and curving video display screens “flexible-displays” have been disclosed by companies like Sony, Samsung, Sharp, and LG, but maintaining an IMAGE on flexible-displays when wrapped around humans, robots, and aerospace drone machinery in motion is not provided. FIG 15 illustrates a flexible-display 99, designed around the helix in FIG 14, which may include a “touch screen” programmed to sense locations to display a FLAT appearing normal image as if viewing a flat video display. PRODUCTION of this invention is focused on one software programming function focused on in this invention is the manipulation of optical mapping that is called the camera projection matrix within three-dimensional (3D) coordinate systems.

This invention teaches the Novelty that any image on a flexible-display around any shape can be software programmed to provide the appearance of a flat “plane” image by programing the flexible display to illuminate pixels within the “projected” image relative to a camera observation point plane to all the curves and overlapping flexible display edges, and joining edges, including during motion of layered flexible-displays relative to one another. When replicating a camera observation point relative to observation of images by applying a motion detector to locate a human’s observation point, in motion, data is not exact, so we can apply a Direct Linear Transform algorithm to program the reduction of image “noise” transferred between electric circuits.

FIG 14 illustrates helix 100. FIG 15 applies the helix in FIG 14. The right-handed helix (cos t, sin t, t) from θ = 0 to 4π with arrowheads 103 showing direction of increasing t. Pitch of a helix is the height of one complete helix turn, measured parallel to the axis 101 of the helix 100. Curve 111 is called a general helix or cylindrical helix 111, if its tangent makes a constant angle with a fixed line 101 in space.

FIG 19 illustrates flexible-display in FIG 15 rolled open flat where length d1 equals the circumference cylinder 110 covered by helix display 99. Length d2 is equal to one half of the circumference of end 115, c1. Axial length d3 of cylinder 110 is unrolled to visualize the video image of a "t", circumference c1 of the cylinder 110, vertical length i1 of the "t" 136, and horizontal circle-arc length i2 of horizontal element of a "t" on a flexible display 200 in FIG 15. Width i3 and i4 (can vary slightly relative to the observation distance from the center axis 101) is the width of vertical i1 and horizontal i2 length of a "t" on flexible display 200 in FIGURE 15. Width i4 is the width of horizontal part of the "t" rolled out flat on plane 110, length is i6 of the actual "t".