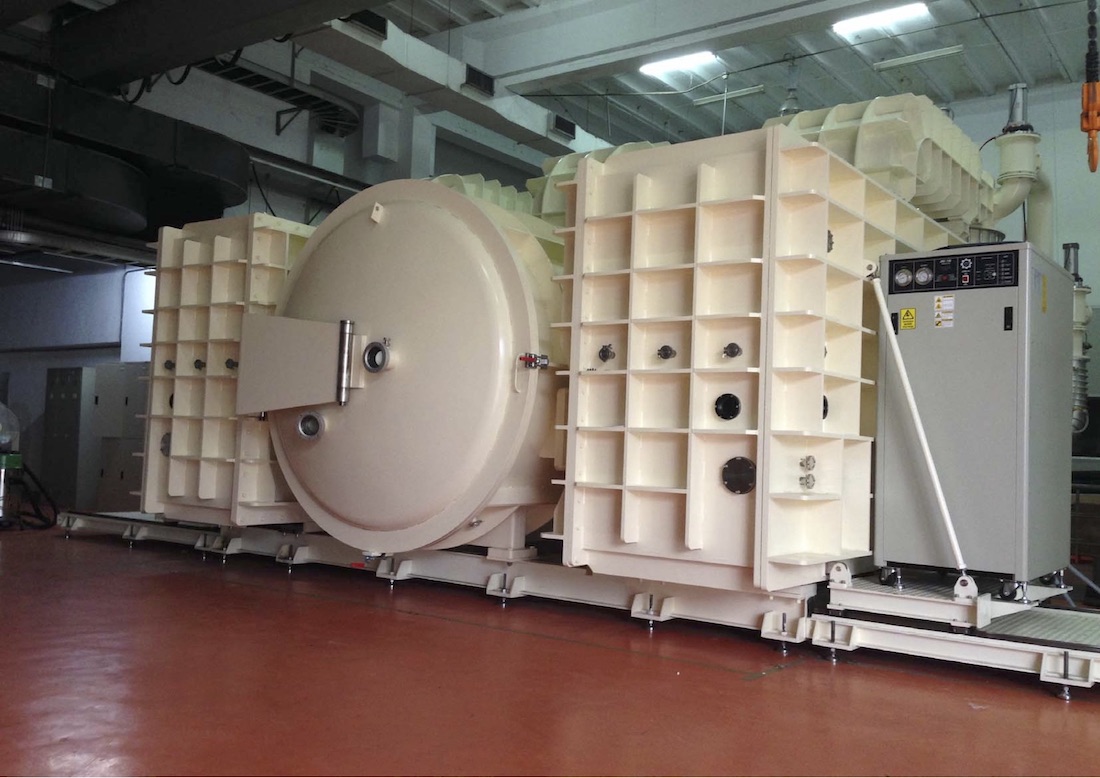 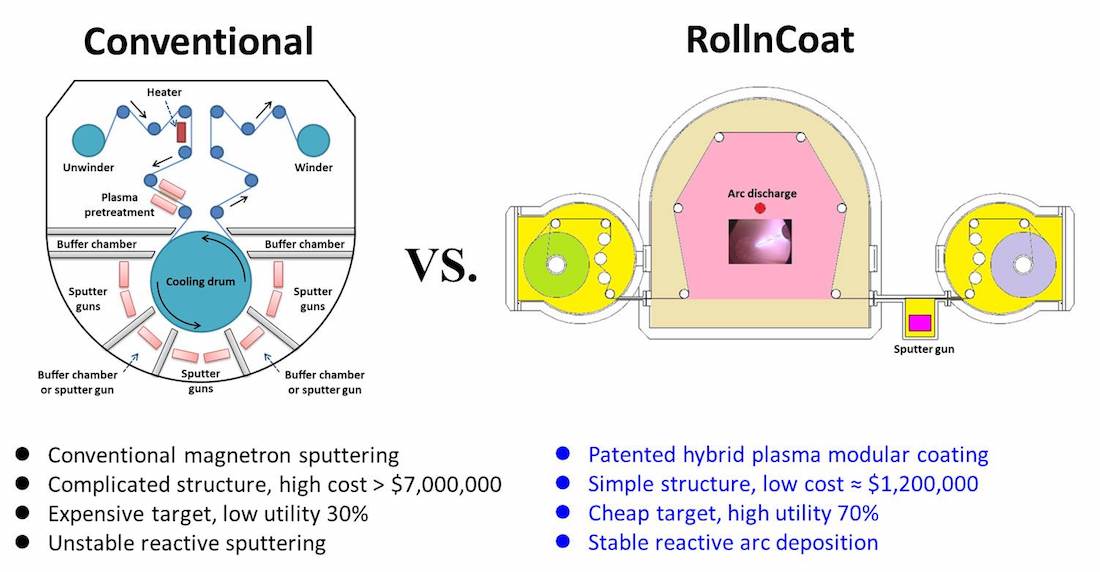 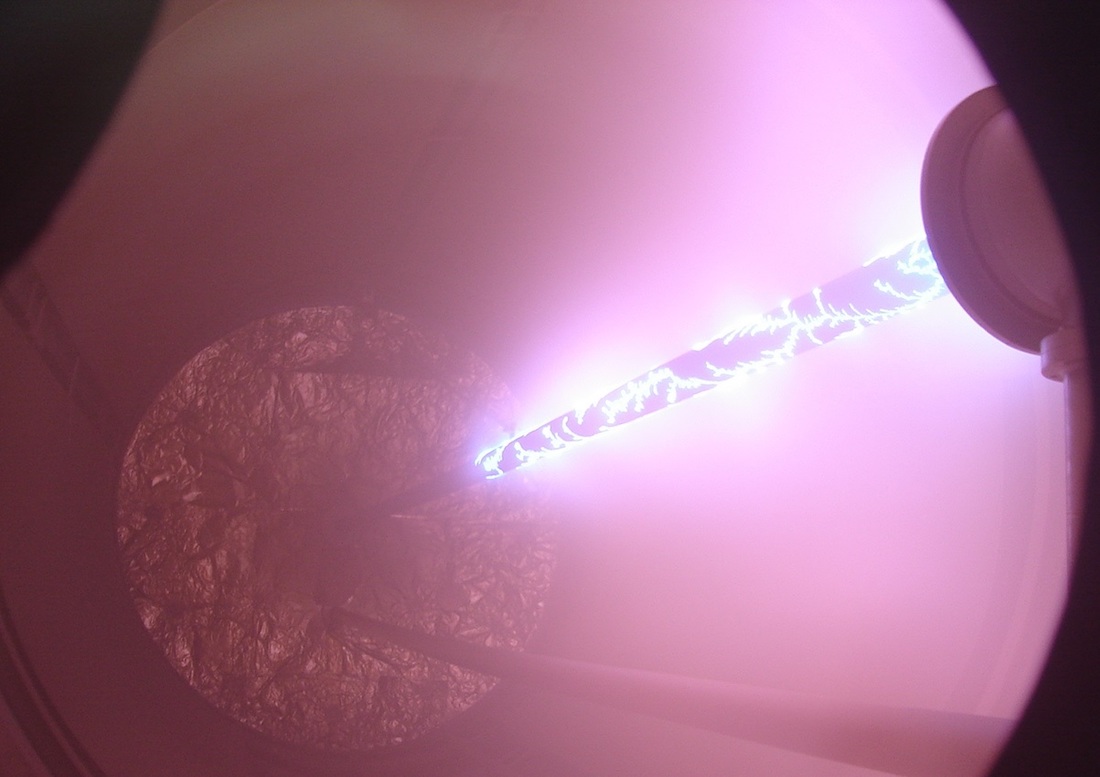 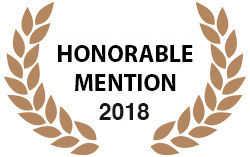 What RollnCoat does
Air conditioning and heating dominate building energy consumption, some 30% and that must be cut. Thermal control coating on building glazing helps. Glass plates with direct-deployed coating are available for new buildings, but old buildings are the real problem. Films with coating that can be adhered to old building windows are true answer. High-performance films definitely are necessary, and designs of good films are available. Technologies for making them also exist. One good design has a simple construction of interleaving thin metal oxide and metal layers. This film type dominates the high-performance market, which is owned by a handful of big brand names. Price of their films are, practically, painfully expensive for many.

How RollnCoat works
Dominating big-brands also operate roll-to-roll production lines. But their entire lines are each sealed inside one single vacuum chamber. Such chamber must therefore be large enough, and large chambers complicate things. These lines use magnetron sputtering guns to coat both metal oxide and pure metal layers. For metal layer, magnetron is fine. But for metal oxide, its coating is so slow a bottleneck, if inexpensive metals are selected for oxide layer. To reduce material cost, production bogs down to low line speeds. To speed up, few options are available. Currently indium is most common to make indium tin oxide, ITO, for oxide layer. But indium is expensive. Literally, big-brand lines trade cost for reasonable production speed.

Further, an array of magnetron guns are lined up to successively coat the oxide/metal/oxide structure on the substrate – usually PET. Cooling means needs to cool the substrate because magnetron guns must coat at small distance that significantly heats the substrate. This and other issues call for use of a feedback control system to manage the line production.

Enter the RollnCoat film production system. To coat the metal oxide layer, arc plasma deposition replaces magnetron sputtering. Metal oxide plasma deposition can be performed across a much greater distance between plasma source and substrate, within 30 to 200cm, compared to magnetron’s less than 10cm. Since there’s no array of consecutive magnetrons to accumulate heat dangerously on the substrate, RollnCoat requires no cooling. In one film design, much cheaper titanium is arc-stricken and reacts with oxygen to form TiO2 for deposition.

Instead of one large chamber, RollnCoat arranges each of its functional units in a modular chamber with adequate size. The line becomes scalable due to its modular design. When production capacity needs scaled-up, additional set of necessary modules can be inserted, and line capacity doubles.

With modularity, a RollnCoat line costs about 20% that of a conventional line with comparable capacity. RollnCoat films’ end-user price can be as low as 50% that of its conventional counterpart. These cost reductions certainly encourage more use of thermal control films in buildings to help curb carbon emission.