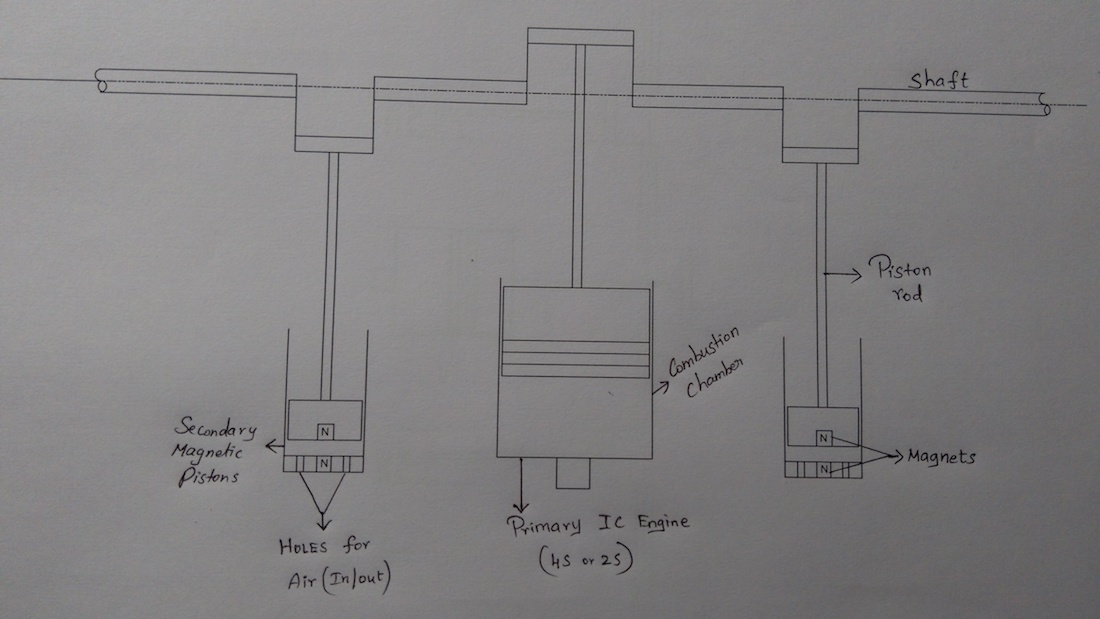 INTRODUCTION:
IMAGNO - the word stands for imaginary engine that relates with magnet. Yes! as per its name, it is my imaginary idea which involves magnet to make a hybrid engine. It is type of engine which is combination of internal combustion engine and magnetic repulsion piston engine. A single car generates half a ton of CO2. The automobile industry is setting some strict environmental regulation in order to reduce these harmful emissions and keep the environment cleaner. The great thing is that the companies have responded to this regulation in a very positive way by introducing hybrid cars.

Existing hybrid cars have both electric motor and a gasoline-powered engine. But my thought is to design and construct a hybrid engine that runs by magnet as well as fuel. The vehicle is made dynamic in nature by making use of magnetic repulsion force and fuel power. It consumes less fuel and creates comparatively less pollution as compared to conventional vehicles.

In secondary section, holes were placed on cylinder head instead of valves for air in/out for cooling purpose. The lubricant process was done through piston rod. Figure 2 shows working of this engine. Practically it increases the displacement - More displacement means more power still you can burn less fuel during each revolution of the engine. Adding magnetic piston arrangement to make an engine more powerful and or more fuel efficient.And strong magnetic repulsion force leads to increase pickup of the vehicle.

Benefits:
1. Achieve high speed in lesser time. And increased horse power without any fuel consumption.
2. Gives continuous power output pulse which makes good stability.
3. Produce less engine vibrations than the other engine that makes much more comfort.
4. Reliability of this kind of engine is high because of less power production in each cylinder which makes less wear.
5. Avoids irregular flame propagation which greatly reduce the knocking and detonation.
6. Heat produced in this engine is less compared to other hybrid engine thus reduce the formation of harmful gasses.
7. There is no need of electric current as other hybrid engines.
8. Suitable for heavy vehicles, racing vehicles and also for light vehicles.

Conclusion: When most people buy a hybrid car, they usually do so with the understanding that there's going to be some kind of compromise between power and eco-friendly driving. As concerns increase over global warming, caused in part by carbon emissions resulting from vehicle fuel consumption, the power provided by a gasoline engine coupled with the fuel-saving qualities of a magnetic piston seem like the best possible combination. We can involve this hybrid technique in v6, v8, v12 engine layouts to make more fuel efficient and reduce noise.