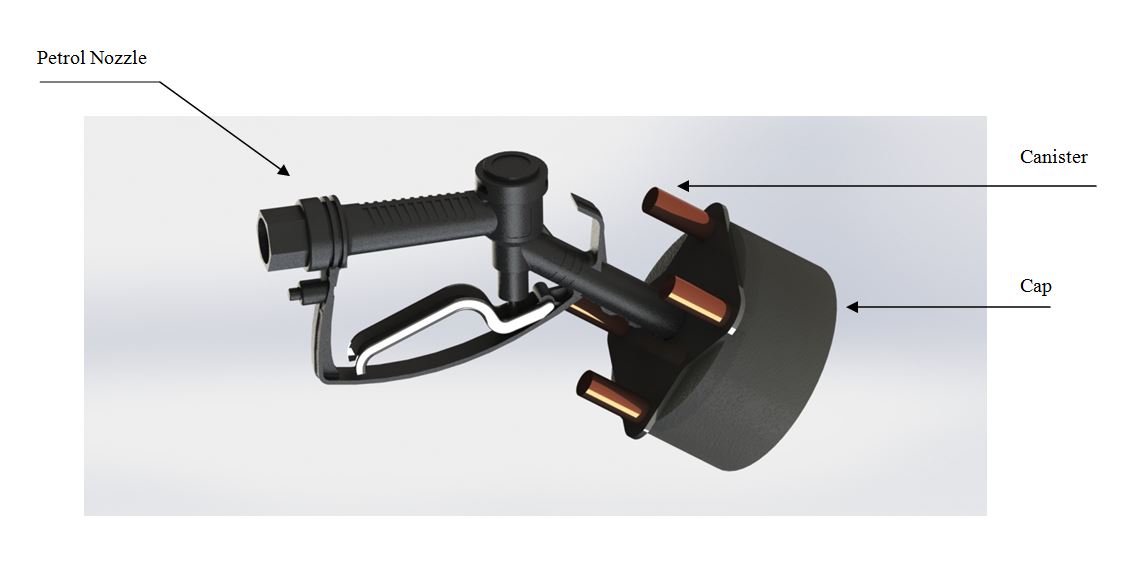 The proposed model represents an innovative idea to curb the harmful effects of the ever increasing pollution problems. The high volatility of petrol results in exhaustive as well as refueling emissions which are both equally responsible in contributing to the increasing pollution levels. The given system aims at reducing the refueling emissions of two-wheelers which occur during the filling of petrol at petrol stations.

The cap has five openings on the upper surface- one for accommodating the petrol nozzle and the other four for securing the canisters. The cap is made up of neoprene mainly due to its high conformity, high resistance to petrol vapors and better wear and tear resistance.

During refueling, this cap (which is mounted on the nozzle) will be tight fitted on the opening of the petrol tank. The petrol vapors thus generated will flow towards the inlet of the canisters. Considering the atmospheric conditions to be constant at 35 degree Celsius and 1 atmospheric pressure, the petrol vapors evaporated per liter of petrol can be approximated to 1.4ml. This value though may be small, but on a cumulative scale, even at a single petrol station is very high.

The radius of each canister is 15mm and its height is 50mm .Based on the initial calculations, for the given volume of the canister, approximately 1.35gm of petrol vapours can be adsorbed per canister before it has to be recharged again. This capacity can be further increased by increasing the dimensions of the canisters or by providing a dedicated large-sized cylinder mounted on the nozzle for adsorbing the petrol vapors.

The neoprene caps can be easily mass produced by injection molding and with minimum finishing processes required later. With assembly considerations such as detachable canisters for easy recharging of activated charcoal, multiple canisters for increasing the adsorption capacity and adequate flexibility of the neoprene cap for adjusting to petrol tank opening variations ensure sustainability of the system.

Currently there are over 75 crore active motorbikes in the world and with this number continuously increasing, saving even a single ml of refueling emission will lead to a high amount of monetary savings.