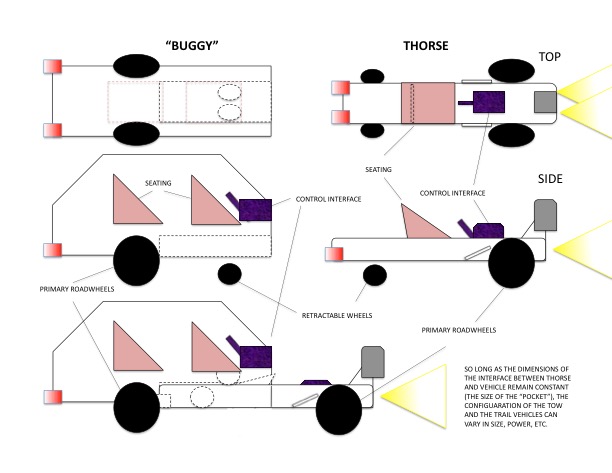 Overcome consumer reluctance to the adoption of self-driving car technology by anthropomorphizing a separate AI-controlled self-driving vehicle which controls the navigation and operation of a connected passenger compartment. Within certain safety parameters, the human occupants would have a residual mechanism for overriding the AI as to the speed and direction of travel.

Instead of putting consumers in the counter-intuitive position of being in the "driver's seat" of a car without the need to maintain situational awareness and control over the vehicle, we use the culturally familiar concept of the "smartest horse in the barn" to create a physical separation between the consumer/travelers and the computer-controlled vehicle that is undertaking the journey, all the while providing reassuring backup control mechanisms--that operate within safety parameters--to be used if needed. The primary benefit is removing the psychological barriers to the adoption of self-driving technology. Other, secondary, benefits become apparent as the concept is further considered.

To achieve primary psychological benefit, we separate the conveyance from the seating area/passenger compartment and delegate the essential driving functions to an autonomous AI. The AI is anthropomorphized with a name and some (non-verbal) "personality" to cement the concept that the AI is primarily responsible for navigation and control of the combined vehicle/passenger compartment.

The horse and buggy provides the essential paradigm. The horse is intelligent enough to find its way, but not sentient; we don't expect it to have a conversation with us. The horse has its own eyes, ears, and brain and can be relied on to stay on the road and accomplish many of the automatic tasks of driving with some human oversight. A passenger can ride on the AI itself, or it can be used to pull a more comfortable passenger compartment (a "buggy"). The horse paradigm will also allow us to simplify the interface between the passengers and the AI. Consumers' comfort with this basic premises (and the difference in design from contemporary automobiles) will make clear that this is a different mode of transportation--one where it is perfectly acceptable that the human passenger does not constantly concern himself or herself with the operation of the vehicle. This, in turn, provides a mechanism to overcome consumer reluctance regarding the self-driving car while at the same time satisfying the psychological need to have the ability to override the AI in the event that this should become necessary. In short, the car isn't driving itself. Rather, the anthropomorphized AI is hauling passengers around, pulled behind it in a towed vehicle. This is the essence of the THORSE.