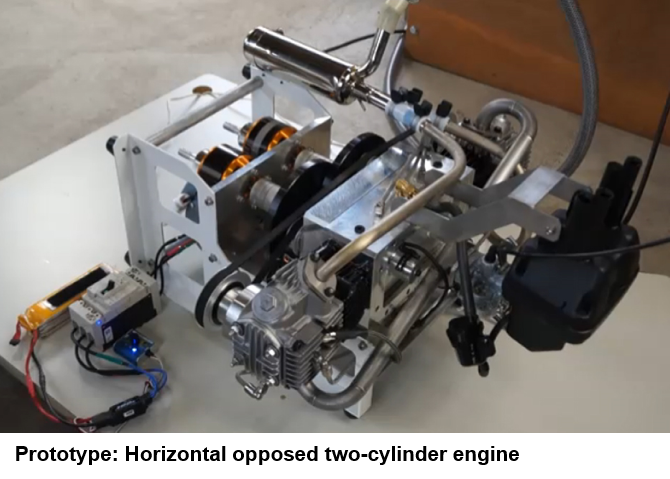 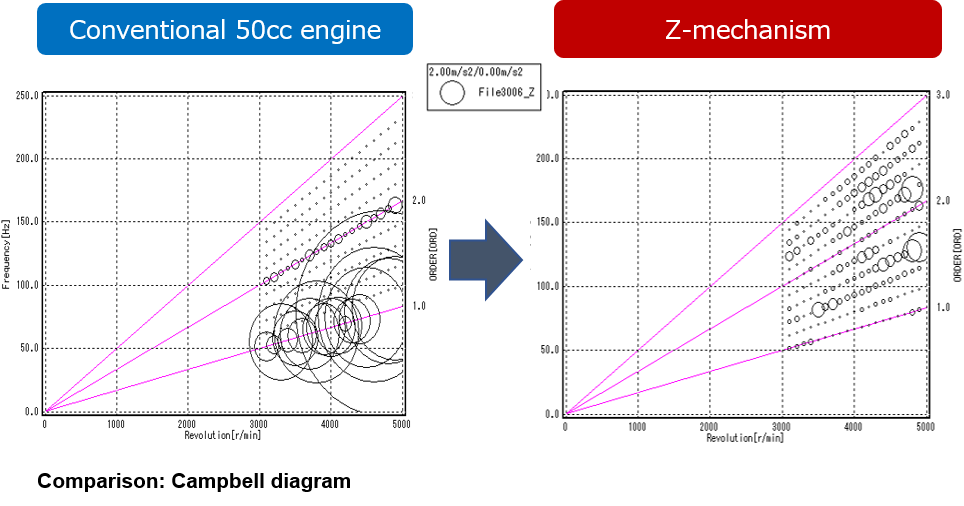 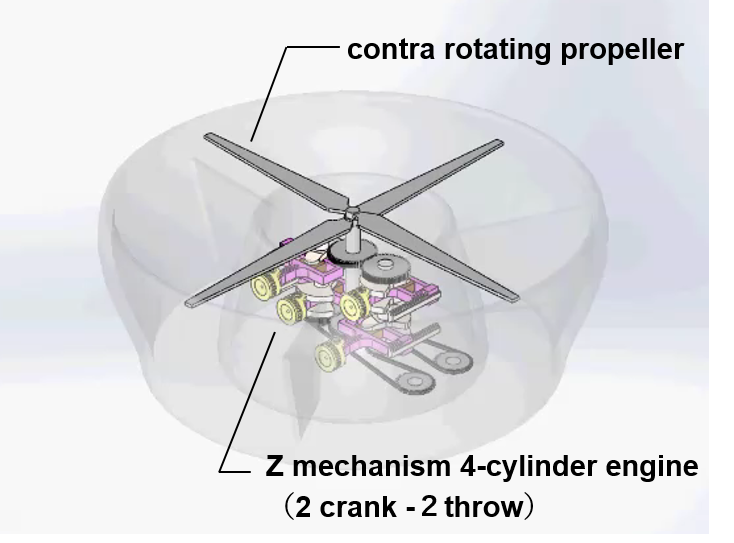 It is common knowledge that a conrod which converts reciprocation of the piston into rotation of the crank is essential for a reciprocation engine. However, a conrod causes side thrust loss and hinders building a fuel-efficient engine. As a solution to this multi-decade problem, we propose our conrodless engine based on our own “Z mechanism” technology.

“Z mechanism” is an alternative mechanism to the piston-crank mechanism. It separates the reciprocation motion of a piston into the horizontal X direction and the vertical Y direction resulting in a rotational motion. We have been applying this proprietary technology towards solving common problems prevalent with the piston-crank mechanism such as energy loss, friction heat, and vibration.

We have developed three engine prototypes and the first one is a single-cylinder engine (Max rotating speed: 7,000rpm) and the second one is a horizontally opposed engine (Max rotating speed: 12,000rpm). Both are built based on the commercially sold 50cc gasoline engine and successfully operated for over 100 hours. The third and latest one is an in-line two-cylinder engine with the commercially sold 320cc diesel engine. All the prototypes have no conrods.

[Increasing the SB ratio]
To build a fuel-efficient engine, we should increase the Stroke-to-Bore ratio (SB ratio). However, if you increase the SB ratio, the inclined conrod would hit the bottom edge of the cylinder. To avoid this, the conrod needs to be longer which results in the engine becoming more sizable. With the Z mechanism, this problem is eliminated because the piston rod moves in a straight motion, achieving an increased SB ratio. It can then reduce the combustion time and heat losses from the surface of the combustion chamber, achieving an improved fuel efficiency.

[Realizing “Ultra-low vibration engine” with two cylinders]
Z mechanism also reduces the frictional resistance and vibration. If you place a bottle of water on the engine anchor, the water surface will not tremble. The low order vibration is eliminated without any extra parts achieving the same results as if adding a balance shaft (see the Campbell diagram). This vibration reduction is conventional to the 6-cylinder engine but Z mechanism realizes the same reduction with two cylinders.

The following is a comparison of the sizes of the 6-cylinder and 2-cylinder engines assuming a 4000cc engine.

We are able to achieve a length and weight reduction of one-fourth compared to a 6-cylinder mechanism.