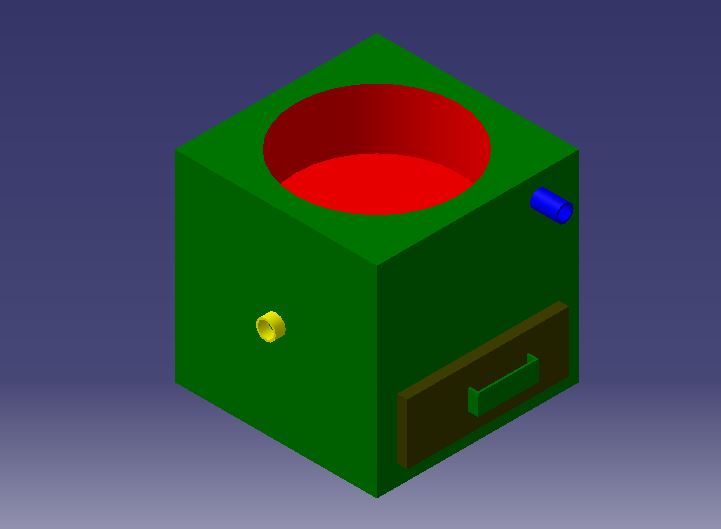 Energy is the one of the primary economy of the world. One of the biggest issues of the energy sector is energy consumption efficiency at house hold level. This consumption differs from place to place based on electric power availability and this electric power availability depends up on the delivering capacity of the country. It is difficult for peoples who do not have enough electric powers supply because it is impossible to do important tasks like cook food. So, most peoples who do not have regular power supply use a simple stove like device that works by utilizing a burning coal for cooking food and other tasks. This device has two major problems. The first problem is that the device is far less efficient than it can be. This is because the heat generated by the burning coal is wasted in many ways like it release considerable amount of heat energy via air since the burning coal is in direct contact with the surrounding. This waste leads to more consumption of natural resources. The second problem is that when the coal is burning, it releases carbon monoxide in to the surrounding. This gas is known to be very harmful when inhaled and there have been many reports on peoples dying from this burning coal stove at home without detecting the carbon monoxide because it is odorless.

This device is about solving these two problems by giving alternative coal stove that have more efficiency and more safe than the existing one. The device works using burning coal as the current one but this device works on heat exchanger principle having a closed structure to trap the carbon monoxide that is released by the burning coal. This means, first the coal is inserted in the burning chamber and after ignition the partition is closed. Since there is a valve that will let air in to combustion chamber that works using a hand air blower the coal will keep burning and after the hand air blower insert the air it will close the valve itself. At the combustion chamber there is a heat exchanger which is attached to the heating position which is the red part in the figure. Since the heat is only absorbed by the heat exchanger the cooking dish will get all the energy generated by the burning coal. The carbon monoxide that is generated by the burning coal will exit via an opening which has a hose that will be placed outside of the house. Depending up on the construction of the house, since the carbon monoxide has heat in it, it can be used to warm the house via convection before it leaves the house but first since it stays for t amount of time in the heat exchanger it also contribute in heating the stove. Details on the design will be uploaded soon for copyright reason. And note that the hose attached to the green valve and it is flexible and reaches outdoor.