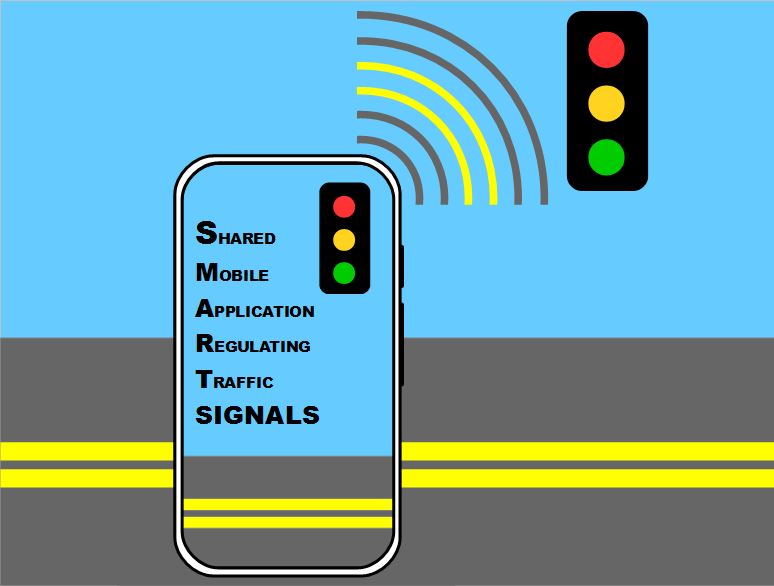 The SMART Signals software will save time, money, fuel, the atmosphere and even human life.

Existing protocols which prevent conflicting green or yellow signals will always have priority.

The app works collaboratively using data only collectively. Mobile phones using the app will function as transponders reporting position, direction and speed. Only traffic patterns can be recognized by the software, not people. Individual phones, drivers and cars cannot be uniquely identified so the system cannot be used to track the movements of any particular person or vehicle.

All drivers will enjoy smoother traffic whether they download the app or not. Even drivers with no mobile phone at all will benefit from the SMART Signals app because traffic moves in waves. If only a few drivers in the wave are using the app the wave is still recognized by the software and all drivers in the wave benefit. The more users there are, however, the more accurate the response becomes.

In time drivers should expect to be able cross an entire city without ever encountering a red traffic light.

On the other hand, speeders will not be rewarded with green lights. Although speeding would be detected speeders could not be cited or even recorded because the software is unable to identify individual drivers or vehicles, but the SMART Signals app can ensure that speeders encounter red lights at every intersection. You'll get there sooner if you don't speed!

Even pedestrians using the app can be detected and traffic signals can respond to allow them to cross the street safely. GPS data allows the system to ignore the mobile phones of drivers or pedestrians moving in parking lots and other similar areas near intersections.

The forces of braking and acceleration cause pavement to deteriorate faster at intersections than elsewhere on roadways. Smoother flow of traffic through intersections reduces the cost of maintaining city streets, which reduces the burden on taxpayers to finance repairs to roadways.

We still call our mobile devices "phones," but they are in fact handheld computers with remarkably powerful Central Processing Units (CPUs). Various scientific organizations such as SETI@home have recruited the personal computers of millions of volunteers to perform high-speed data analysis through distributed computing. The SMART Signals app can do the same thing using tens of thousands of mobile phones across an entire city as parallel processors finding local solutions for local traffic regulation. The more traffic there is, the more processors there are to crunch the numbers.

The SMART Signals app is the future of city traffic.