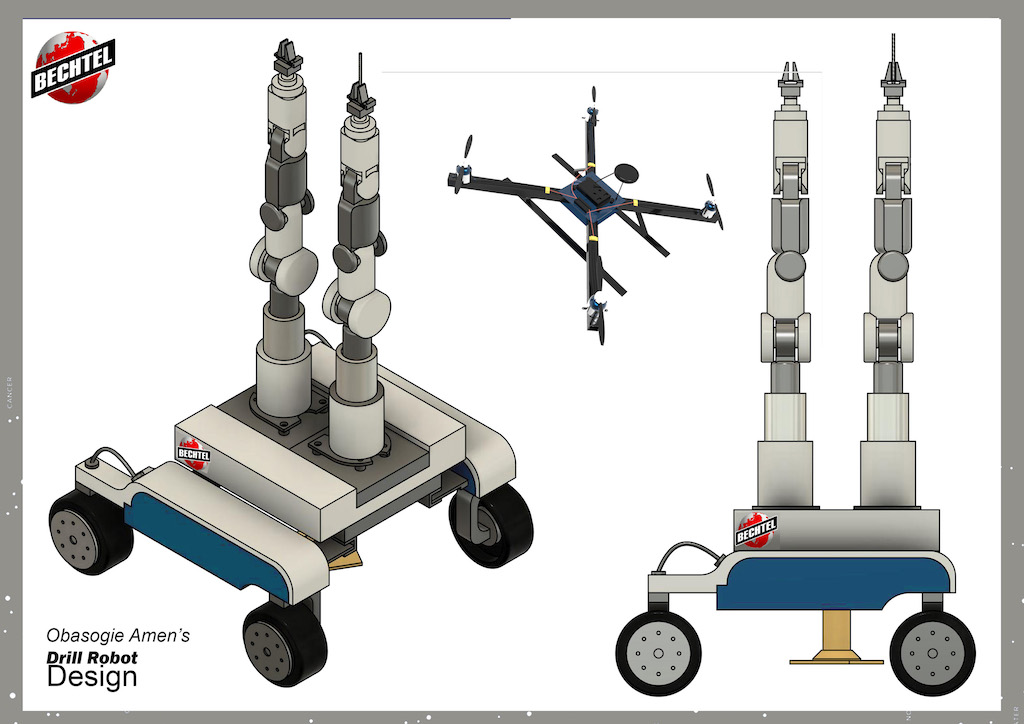 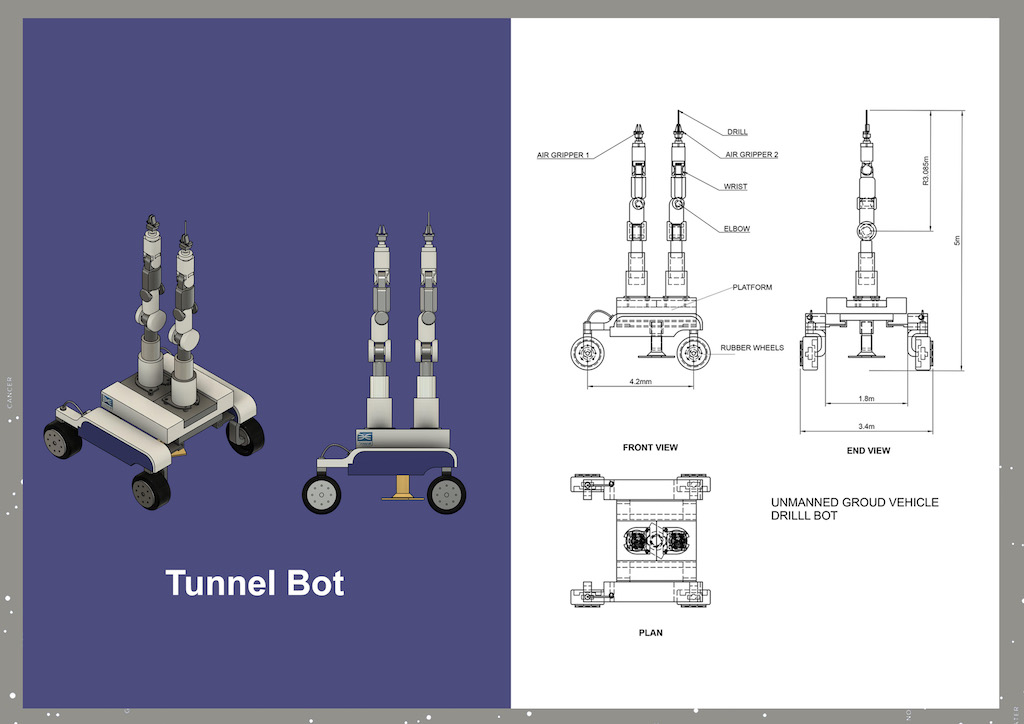 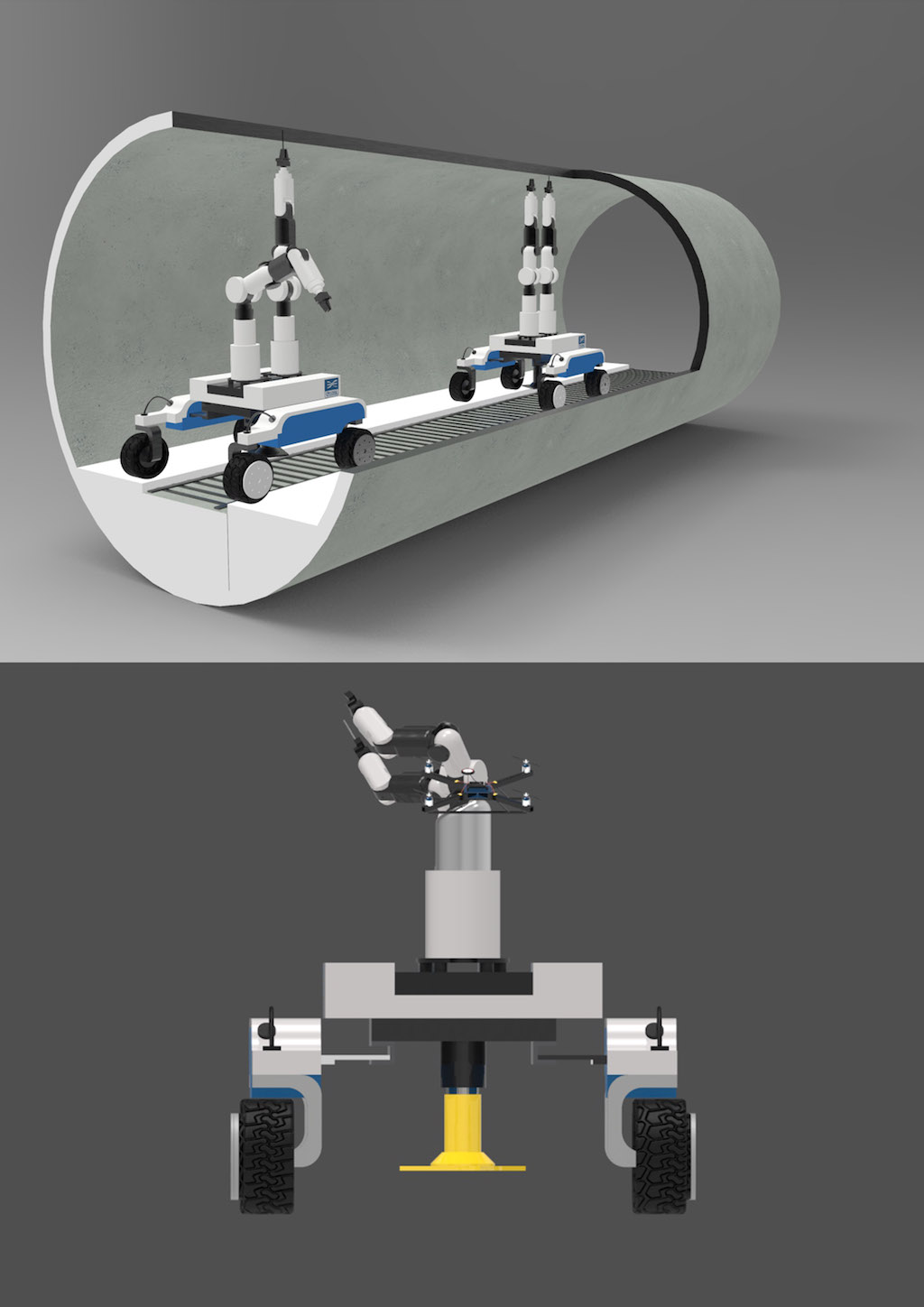 The design is a four wheeled unmanned ground vehicle(UGV) working without a human onboard. The robot is electrically powered and with a backup battery pack.

The vehicle moves on four rubber wheel and is suitable to operate across the rail tracks.

PLATFORM
The platform is fitted with the wheels, utility and power. The robot is fitted with ultrasonic sensors in other to perceive the environment. It is also fitted with cameras for more perception and visual sensing of the area.

CONTROL
The vehicle is both Remote-Operated and Autonomous enabling for a wider range of control. This is made possible by sensors, microcontrollers and computing systems of the operation team which plan the operation before hand from the data, design
and 3D LiDAR scans of the tunnel gotten earlier from an unmanned aerial vehicle (drone) fitted with a GPS, LiDAR scanner and camera.

DRILLING/MOUNTING FEATURES
The UGV is mounted with two Robotic arms with six degrees of freedom each. These arms are both fitted with a drilling system and grippers. The arms are fitted with force, position and torgue sensors for precision. The robot arms also have fitting for a pneumatic system increasing and lowering the arm as needed.

OPERATION
The LiDAR/GPS equipped drone flies through the tunnel getting a scan accurate to 2cm. Multiple overlapping photos about 80% (overlap) of the tunnel is taken as drone flies through the tunnel autonomous flight path. The ariel photogrammetry creates
the 3D maps of the tunnel. This makes it easy to plan and design the operations. The preplanned operation is programmed into the UGV which is set for work. The UGV could be remotely controlled to get into the tunnel resting across the trail tracks. Then to perform a drilling operation, it navigates to the area in the tunnel to be drilled and the arms direct the grippers which are set apart to drill. In the case of mounting a bracket, the grippers come into action, retracting the drill bit into the arm and proceed to work together or unanimously in gripping and placing the bracket.

The drill robot is designed to be compact and fit with a width of 3.4m and length of about 4.9m. It is also designed to permit the work of more than one drillbot in operation, saving time and increasing productivity.