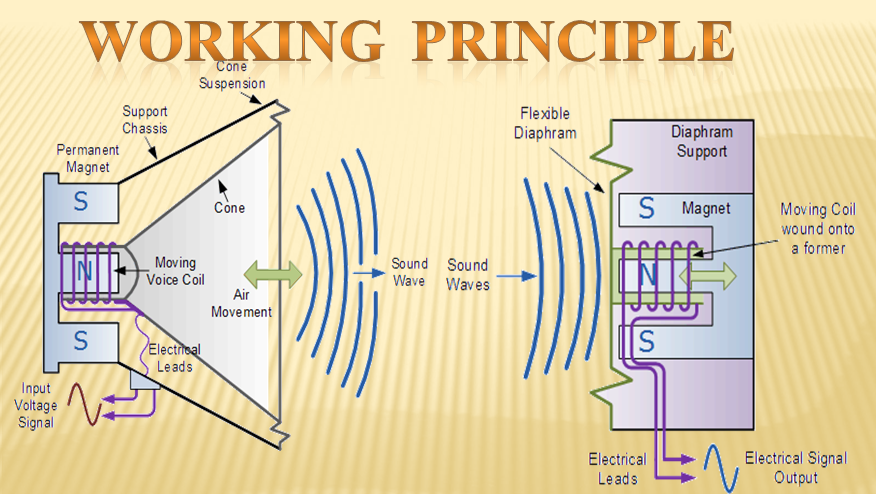 Noise Pollution is the biggest problem faced by all the countries and all of them are investing a huge amount of money as well as time to solve the problem of pollution. Noise to electricity is not only solves one of the greatest problem of noise pollution but also gives the most demand able output which is electricity.

A loudspeaker (or speaker) is a transducer, which converts an electrical signal into sound waves. Since noise is also a form of sound wave or mixture of different kinds of waves, which gets wasted in the environment, so by law of conservation of energy it can be converted into another form of energy i.e. electrical energy, so by using a speaker in its reverse form we can convert this wasted energy into useful electrical energy. In heavy noisy places (like parties , clubs , railway, metro stations, road traffic areas, movie theatres), we use a speaker to receive the wasted sound waves (noise). These waves will provide mechanical vibration to the diaphragm of the speaker so that the diaphragm starts oscillating, since the coil of copper wire is attached to the diaphragm of the speaker, the coil will start oscillating and then due to back and forth movement of the coil an electric field will be produced due to the magnets placed near the coil, which gives the electrical energy from the outlet point of the speaker. Since this output electrical energy is non-continuous so we use a set of capacitors which works like a bucket of electrical energy. Capacitor stores the electrical energy and the moment when the capacitor becomes full it starts giving continuous flow of output current. By using capacitor we can get maximum amount of current in a continuous way.The generated electricity is efficient since the speakers used is of zero maintenance that means ones you install the speaker and make the proper arrangement nothing is to done after that accept getting electricity from it. So it is a cost effective and one time investment method of getting the electricity.

The target is to provide electricity in the interior areas and utilizing the noise pollution. The measures which can evaluate the success of this idea is that, there is enough amount of noise around us and it gets wasted in the environment creating pollution but through this idea this problem is solved and the biggest requirement of electricity is also fulfilled up-to certain amount. It is a very cheap method of producing electricity and can be used anywhere on the earth. The most important advantage of this idea is that there is no harmful output of this process, so anyone can use it with full safety.