Don't Store It, Freeze It 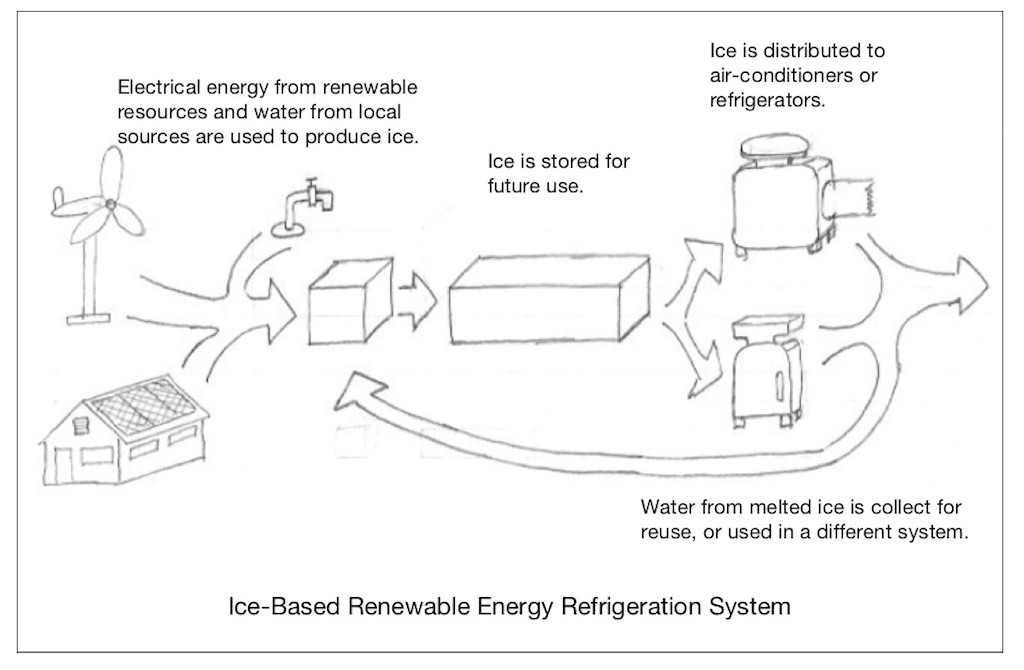 Renewable energy solutions come with their own problems, and managing the trade-offs will determine the success of a technology. Especially, with a desire to maintain and expand our modern standards of living. The diffuse, intermittent, and unpredictable nature of wind and solar energy has led to research and development in how to store the electrical energy generated. However, a partial solution to the intermittent nature of wind and solar energy is to transition our more modern refrigeration systems back to ice boxes.

Storing electrical energy, in cars or wall batteries, could be a partial solution to the intermittent and unpredictable nature of wind and solar energy. The battery storage solution comes with its own set of problems, to include mining, transportation, deployment, and disposal.

An ice-based renewable energy refrigeration system would need to consist of a series of devices to include an energy producer, water source, ice maker, ice storage, ice-based refrigerator or air conditioner, and water collector. Water and ice storage would be scaled to need. A family-sized system would be small enough for a house or apartment. Larger ice makers and storage systems would be used for larger industrial buildings, such as a server farm. Transportation and distribution of the ice, which can be very heavy, would likely be local. A family-sized system could produce 10 kilogram blocks; an easy lift. An industrial-sized system could produce larger blocks, which would be moved by machinery. The system could be designed to reuse melted water, either to produce more ice or for use in another system.

Ice-based renewable energy refrigeration would create a more complex system than we have today, and it would be more convenient to store the energy in a battery, and then use the stored electrical energy to power a refrigerator. However, using the electrical energy to make ice for refrigeration and cooling could be as simple and more reliable than a battery system. The advantage of developing an ice-based renewable energy refrigeration system would be to stabilize the electric grid during peak production of wind and solar energy. Likewise, the electric grid would have more capacity for other needs.

This combing of refrigeration and renewable energy sources is a way to maintain a modern standard of living. Cost and convenience should always help make decisions. Bypassing the intermittent and unpredictable energy nature of wind and solar would increase the reliability of wind and solar energy and would be a good measure of success.