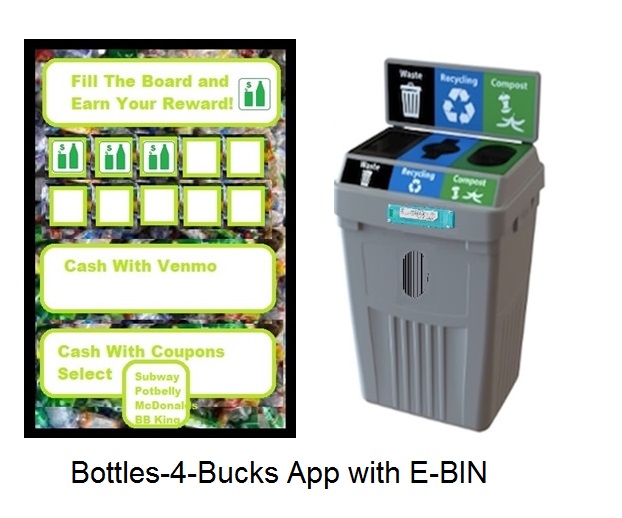 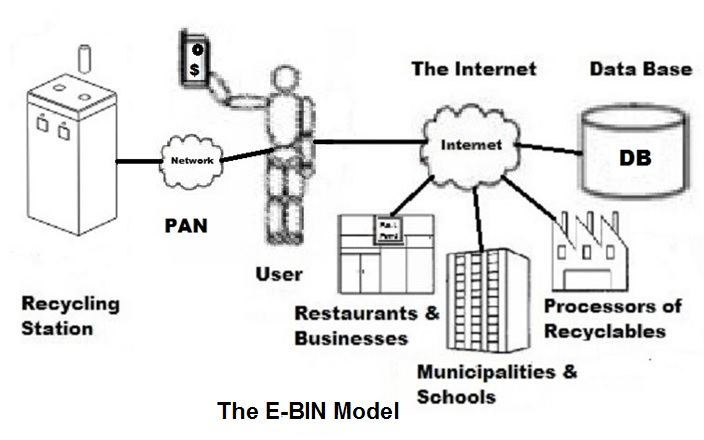 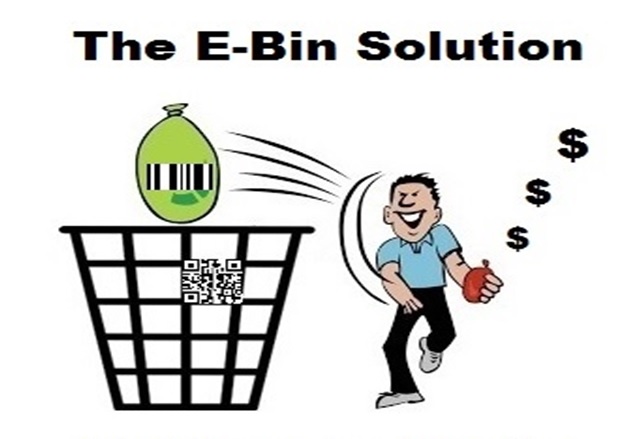 E-BIN is new way to recycle with a mobile phone app system known as Bottles-4-Bucks. The software encourages recycling by paying rewards and saves city, university and tax-payer dollars by simplifying the recycling process. The app communicates to any existing recycling bins by simply adding QR (Quick Response) code stickers to them. Enhanced bins will communicate via Bluetooth. Collection sites are placed at key locations throughout cities, parks or campuses and can be arranged as needed to sort containers of glass, plastic, aluminum and other materials of choice upon deposit.

Participants earn “green points” in the form of restaurant coupons, event tickets, student perks or “electronic cash” on their phone app for good deeds in recycling. Existing recycling bins can be used and arranged as needed to keep the castoff plastic bottles, glass bottles, cans and other waste separated. An app on the user’s smart phone is used to scan the QR code at the recycling station along with the UPC (Universal Product Code) on the beverage bottle to be discarded. The information enables a software algorithm to inform the user of which bin to use and provides credits or cash rewards to them as they deposit cans, bottles and other trash. Credits are also earned by depositing items that don’t have UPC codes such as Styrofoam or plastic Solo cups by entering the item’s name. The benefit of E-BIN being that trash is separated as users toss their recyclable into the correct openings identified by the phone app. This generates valuable recyclables, improves the recycling process and makes trash collection much easier.

Janitorial staff is informed automatically about full E-BINS and collects the trash from them as they normally do. The bags of separated materials are dumped into standard four-foot sized recycling containers located where trash is typically consolidated. Containers are picked up by recyclers at reduced costs because of the higher quality material – presorted recyclables. Even for cities or universities that use single stream recycling, E-BIN still gets more trash into containers, educates the public on the types of recyclables, makes recycling fun, keeps the environment spotless. E-BIN offers many other advantages and even improves the single stream recycling process.

Benefits of the E-BIN method:
• Saves of oceans from millions of plastic bottles by educating the community and students on the value of recycling
• Encourages the public to get not only recyclables, but all trash into bins
• Helps keep streets, buildings, arenas and dormitories fee from bottles, cans and trash
• Lowers recycling costs charged by recyclers since materials are separated upon deposit
• Improves handling and safety of the trash collection process – known types of materials are easier to handle in a safe way
• Informs facilities staff of full trash bins thus preventing unsightly overflow of trash
• Earns cash for cities or universities through valuable aluminum and plastic recyclables and identifies and organization as being a “green” leader
• Can be used for challenges between neighborhoods, clubs and dormitories.