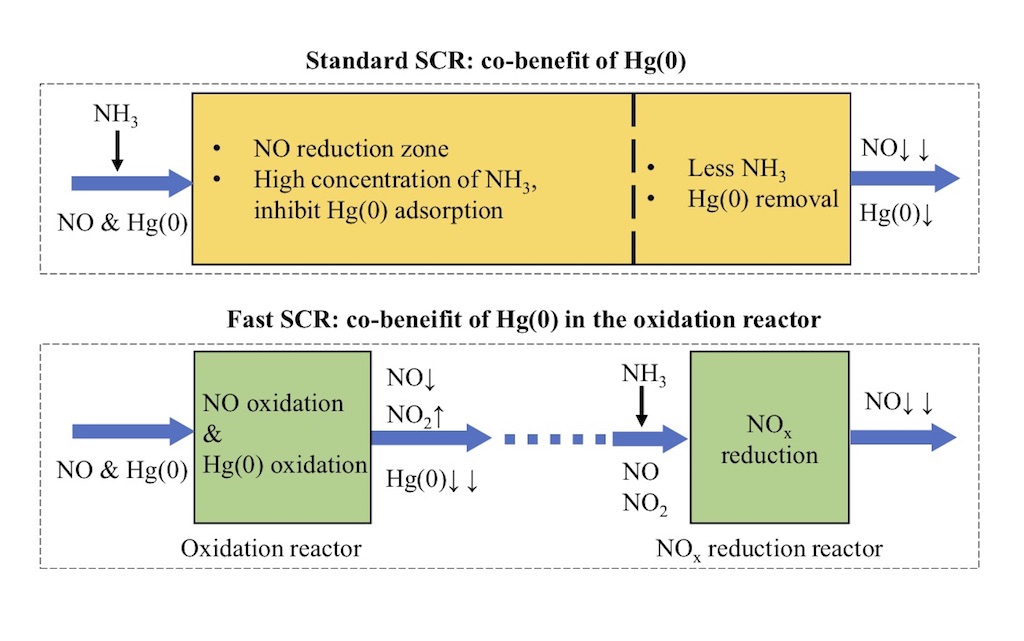 An agreement has been reached between scientists that mercury exposure today is so high in many areas of the globe that it threatens human health. Mercury compounds have carcinogenic, mutagenic and teratogenic properties. Therefore, the Minamata Convention to limit anthropogenic mercury emission was signed in 2013 and ratified in 2017. To limit the anthropogenic mercury emission will be significant for creating a cleaner atmosphere in the future.

Coal combustion in coal-fired power plant is one of the main sources of anthropogenic mercury emission around the world, and the mercury released into the atmosphere with the flue gas emission. In the coal-fired flue gas, elemental mercury, Hg(0), is difficult to be controlled due to its high volatility and low solubility. The selective catalytic reduction (NO-NH3 SCR, the so called “standard SCR”) DeNOx unit in coal-fired power plants is obtained as co-benefit of Hg(0) oxidation. In this SCR reactor, the NO, NH3, Hg(0) and O2 exist in the same zone. In this process, Hg(0) will be converted to soluble Hg(2+) and then absorbed in the desulfurization. Nevertheless, in the standard SCR reaction, NO adsorption on the commercial SCR catalyst is usually weak at the typical reaction temperature and atmosphere. Accordingly, the promotional effect of NO on Hg(0) oxidation is always negligible. In addition, the NH3 inhibit the Hg(0) adsorption and oxidation, because the NH3 is more easily adsorbed on the active sites.

Therefore, we developed a new strategy for the synergistic oxidation of NO and Hg(0). In this new process, the NO reduction reaction rate increased by more than ten times and the Hg(0) can be much more easily adsorbed on the catalyst. In this newly designed process, the SCR reaction can be divided into two distinct steps: NO catalytic oxidation to NO2 in one reactor and (NO+NO2)–NH3 SCR in the other separate reactor. Hg(0) will be synergistically adsorbed in the former reactor. In the NO oxidation reactor, the NO will be adsorbed, activated and oxidized on the catalyst. Moreover, there is no NH3 in the Hg(0) adsorption reaction atmosphere. We also found the Hg(0) can be adsorbed via two domination reaction pathways.

I believe that the method will help us to create a cleaner air in the future.