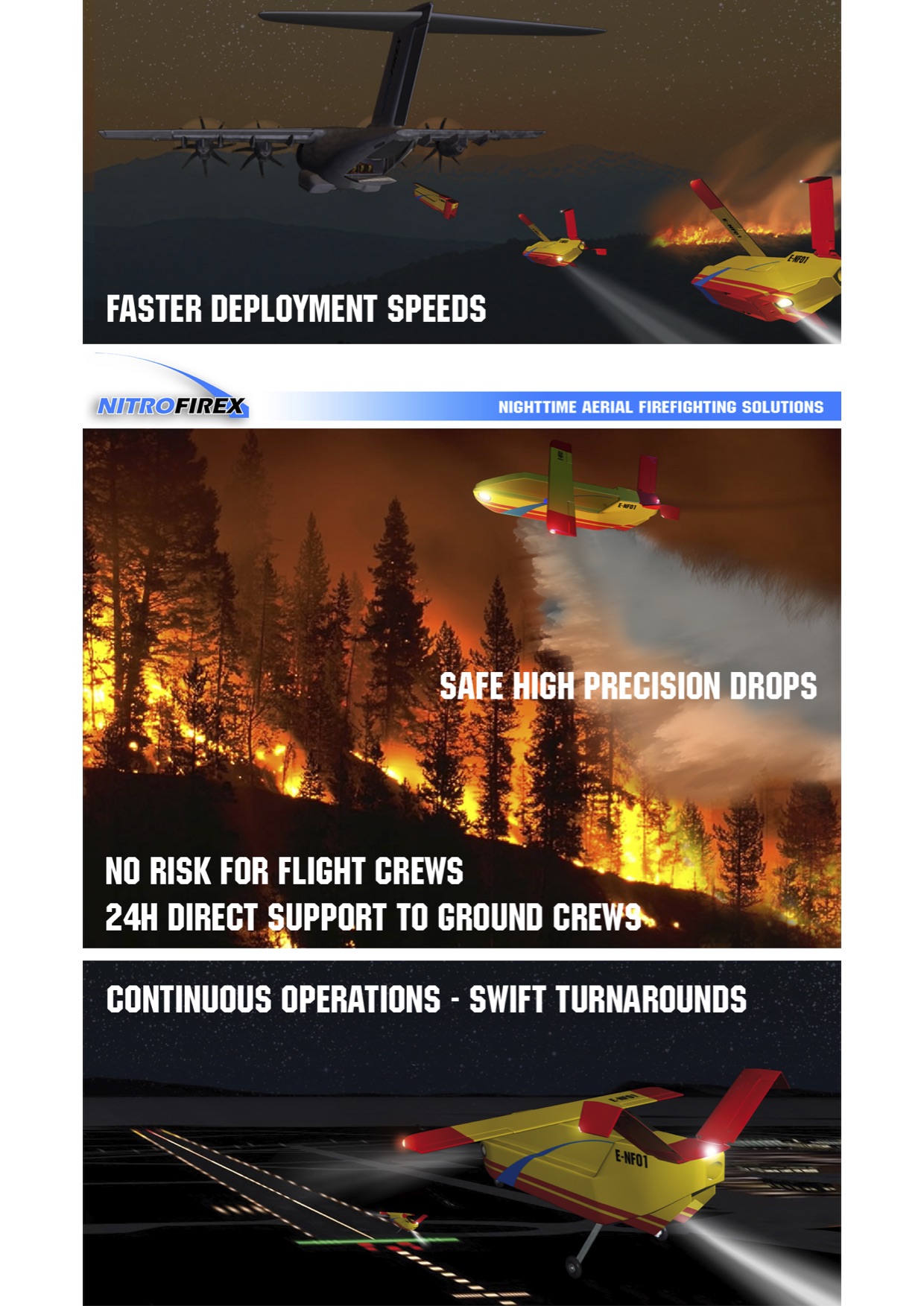 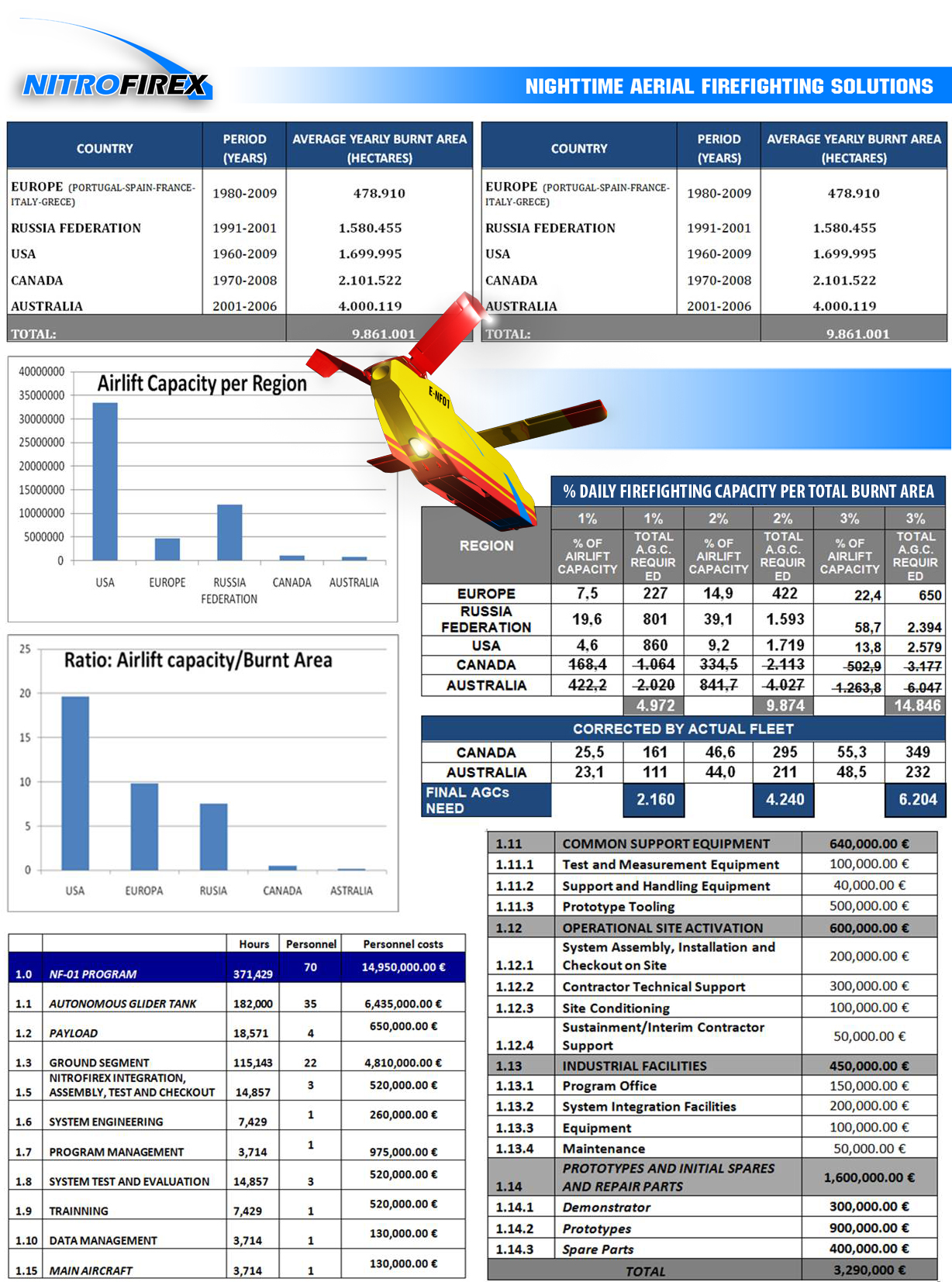 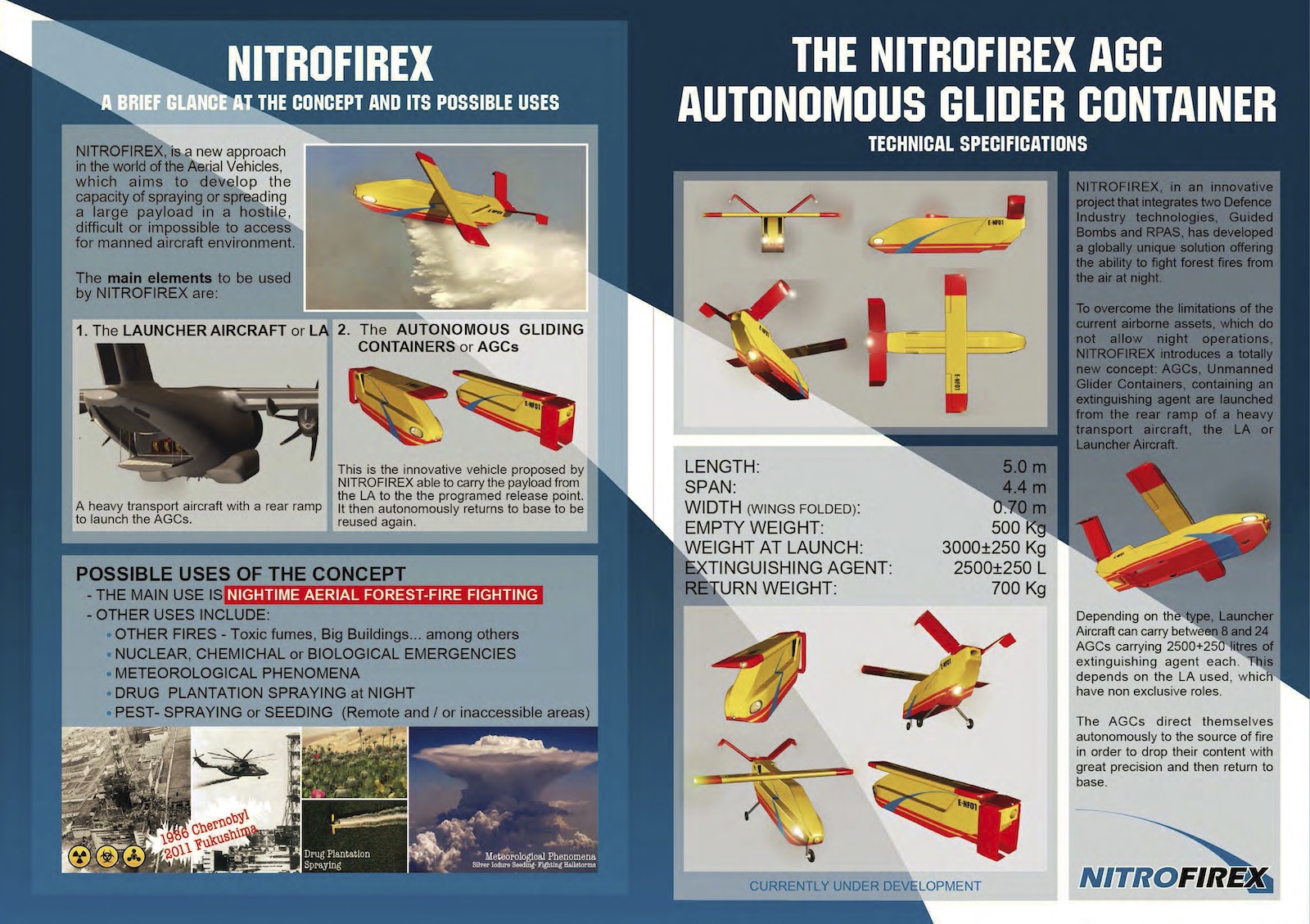 The maturity of the technologies for the guidance and control of UASs allows proposing innovative operational options such as the ability to spray a significant amount of an agent of any sort at a pre-established point in the atmosphere.

This is the case of NitroFirex, an innovative project that integrates available technologies from the defense industry to achieve this operational capability. Of all possible applications the forest-fire fighting at night is where NitroFirex places its highest priority. This is because of the ecological damage these fires bring forth, the cause social alarm they generate and the human and economic losses that take place whilst fighting them.

NITROFIREX at last offers the long awaited nighttime firefighting capability and also allows direct support to the ground crews in their relentless fight against forest fires.

The ability to transport large amount of payload in the minimum time to the area of operations is performed by heavy transport plane or helicopter (Launcher Aircraft L A) designed to do this at the most efficient economical way.

What NITROFIREX does is to transport this payload from the transport plane or helicopter to the programmed release point.

This is achieved by using unmanned Autonomous Gliders Containers, AGCs that are released through the rear ramp of the planes or from the helicopters hanging like a bucket. The AGCs fly autonomously to the programmed release point in the source of the fire realizing their contents with utmost precision and then returning to base for reuse.

Once the AGG drops the extinguishing agent it performs its escape maneuver using its remaining speed and big weight loss to attain as much altitude as possible.

Upon reaching the highest point it returns to its base of operations, empty now, so as to be reused as soon as possible.

The base of operations is an airport close to the fire to which the Nitrofirex system is moved when called for.

The amount of countries hit by forest fires is numerous. The heavy financial and human losses generate social unease and political concern. The impact on the environment incurs in a direct manner in harm to biodiversity and indirectly with the release of big amounts of carbon dioxide into the atmosphere.

Paradoxically in the sector of aerial firefighting no modern aeronautic technologies have been implemented up to now, especially if we compare it to all other sectors of aviation where the innovations have been really significant.

Because of all that has been mentioned the NitroFirex project raises the application of modern technology in the aviation sector with the goal to improve the operative and economical efficiency and above all to offer nighttime operation, which is the main shortcoming of current aerial means.