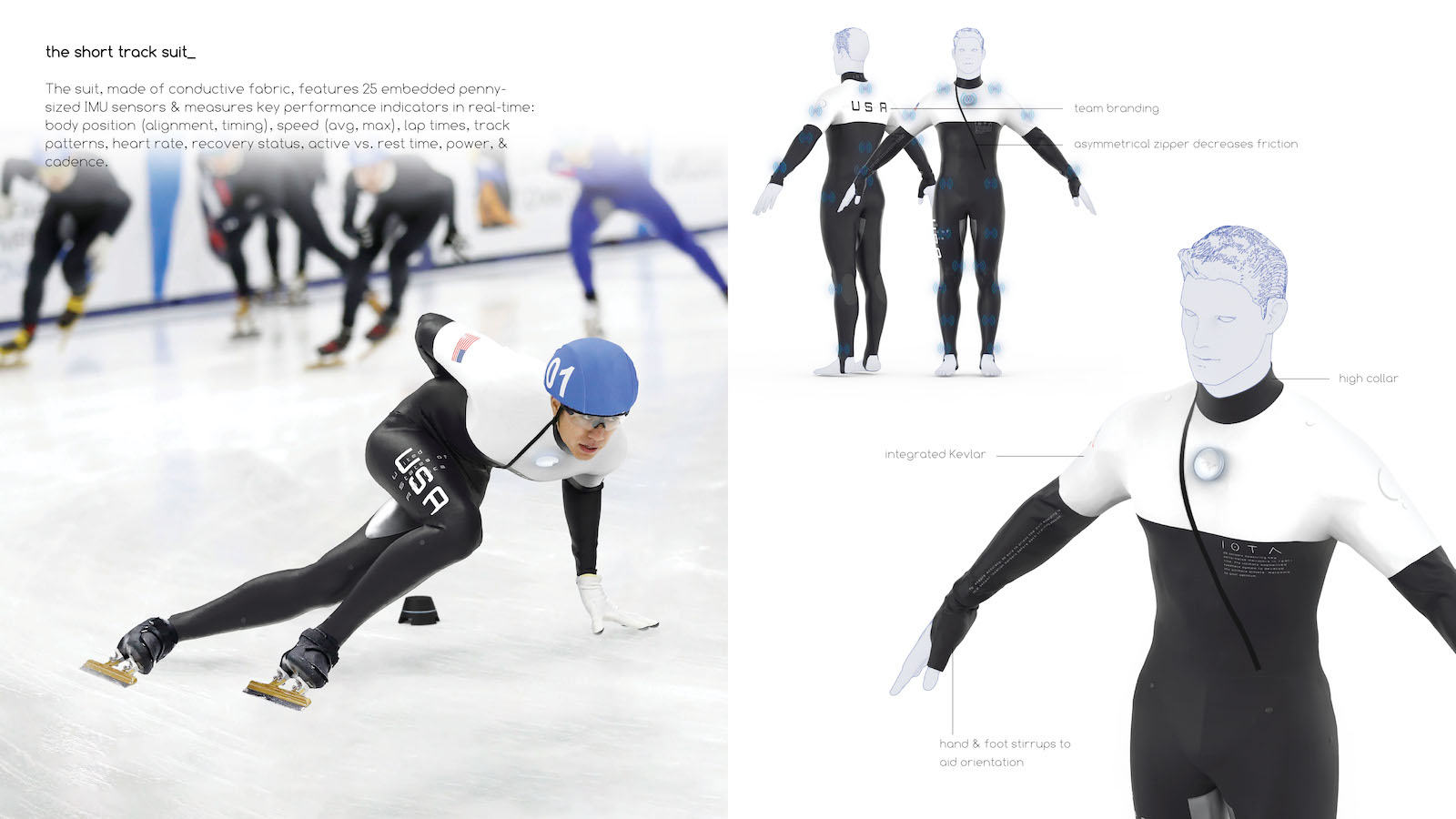 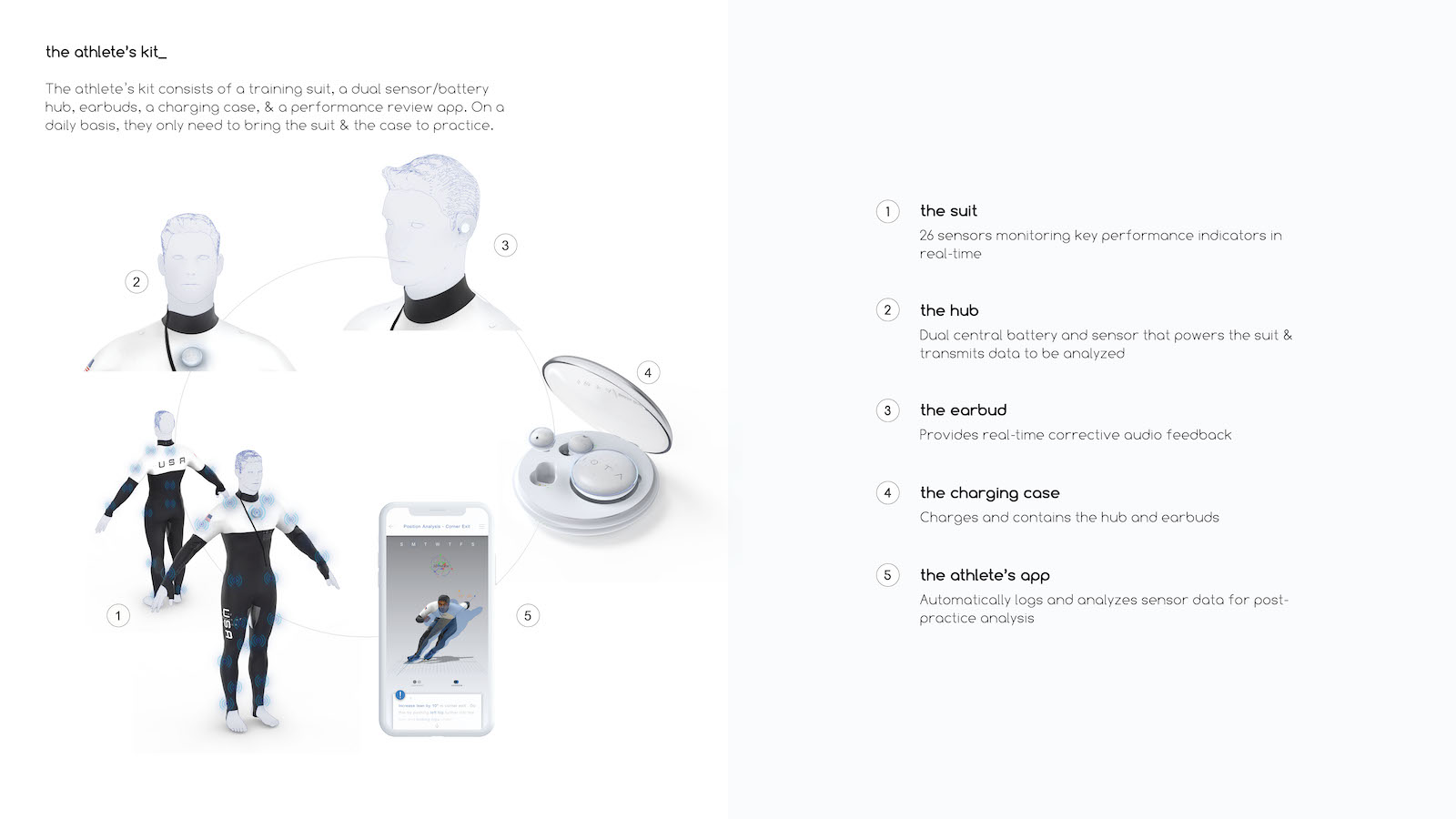 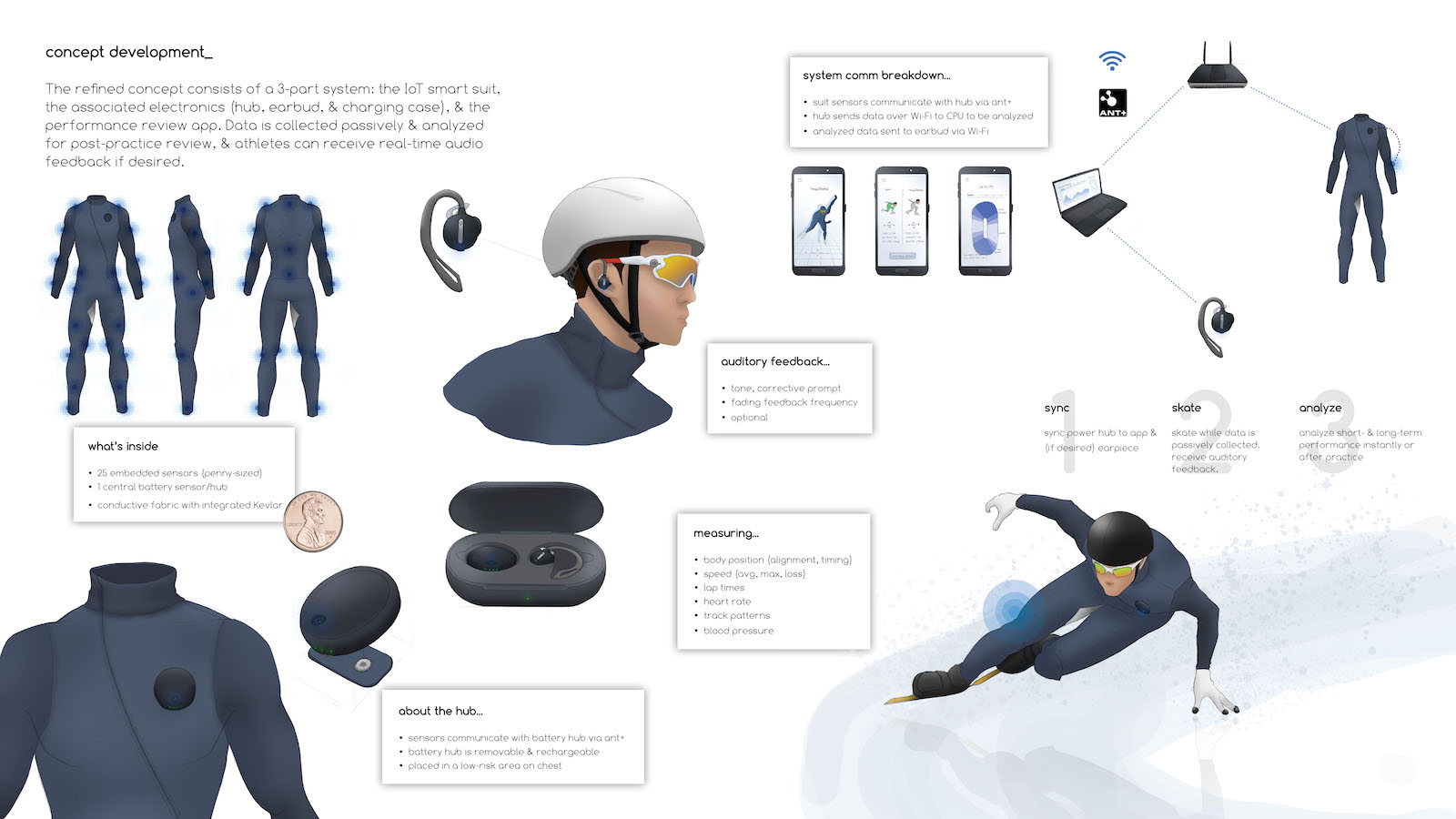 IOTA is a training tool designed to give elite level speed skaters real-time, comprehensive feedback during on-ice training. It provides an unprecedented level of analysis not only to coaches but also directly to athletes. The system comprises a suit outfitted with 26 embedded IMU sensors that record and analyze performance in real-time and communicate this data through digestible graphics via the accompanying app. In addition to visual feedback, athletes have the option to get real-time auditory feedback via an earbud. IOTA captures body position, speed, lap times, heart rate, track patterns, and blood pressure and uses algorithms to determine each athlete’s optimum in these categories.

IOTA is unlike any other training tool in that it provides comprehensive performance data that has traditionally been impossible to capture outside of expensive lab settings. Currently, athletes are completely dependent upon coaches for feedback, and that feedback is neither individualized nor consistent. This is because it’s extremely difficult to get cameras on the ice safely and time consuming to do video analysis during practice; coaches can’t give each athlete consistent, customized feedback when working with large groups; and it’s difficult for athletes to understand feedback without visuals to reinforce it. IOTA captures massive amounts of training data for each athlete and analyzes it in a digestible way, providing a complete picture of their performances.

This system was designed to require no significant changes in behavior from coaches or athletes; it integrates seamlessly into already established on-ice training practices.

IOTA isn’t marketed to the masses and therefore doesn’t need to conform to general consumer price points. Collegiate, World Cup, and Olympic teams would purchase this system as an investment into their athletes/teams, so cost is not as much of a limiting factor in terms of design and manufacture. Electronic components would be produced with the same practices and at similar price points used by companies like Apple and Samsung. Injection molded plastics and standard electronic parts would be used. The suits would be made of 3D knitted conductive fabric with integrated Kevlar. The sensors would be inserted once the body of the suit has been finished and then sealed in with a final stitch on the inside of the garment.

IOTA is designed for elite skaters, however, a takedown version of this system could be adapted for the semi-pro and amateur levels. Especially in countries where speed skating is popular like South Korea, China, Canada, and the Netherlands, the market for IOTA is present, and with speed skating becoming an increasingly global sport, the demand for an edge on the competition is growing quickly.

IOTA could also be adapted to other sports that have proven similarly difficult to gather comprehensive and accurate training data for like skiing, snowboarding, and swimming. Any sport would benefit immensely from the quantity and quality of data captured using IOTA. This system democratizes the highest quality augmented feedback technologies that can help every athlete get closer to their individual optimum.