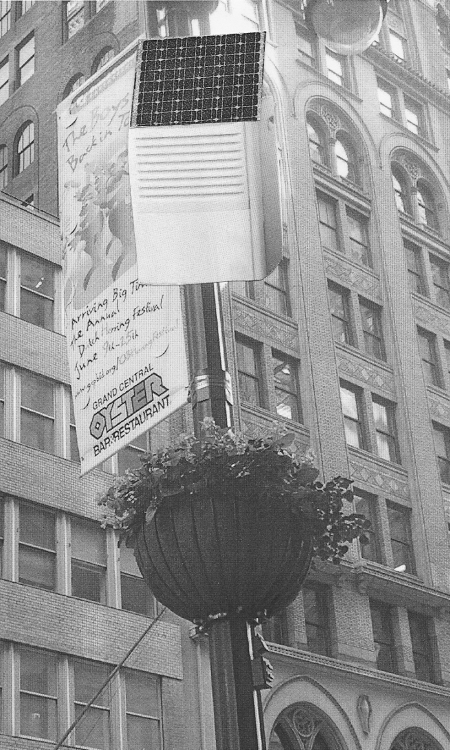 The city could be ever more beautiful with planters appearing on light poles, street corners, roofs and hanging from buildings. However, maintaining the planters – watering them – would be exorbitant. In New York, to water the planters, we use at least 3 full time civil-service employees. One to drive a truck the other two stand in the back, and as one waters the plants, the second one supervises.

With NEVERWATER, watering planters would be unnecessary. Planters could appear everywhere, even out of reach of plumbing. NEVERWATER is an ordinary planter with a decorative attachment above it. The attachment is simply a dehumidifier powered by a solar panel. The device need not be large since the solar panel would have all day to charge up an internal battery generating enough power to run the unit for the few minutes of use the dehumidified would need.

When the sensor placed at the bottom of the planter indicates that the soil is dry, a switch would turn on the dehumidified that would drip-irrigate the soil in the planter. The device would automatically shut down when the soil sensor indicates that sufficient water has been added.

As a backup we could connect the NEVERWATER unit to the electric current available in light poles just in case more power may be needed. However, even in the driest of summers, there is water in the air and if the days are too cloudy to generate power, it is probably raining and watering the plants.

These planters could be filled with decorative plants such as flower or grow food in unmanned aerial gardens.

This and hundreds of other invention are available from Bálint Szent-Miklósy KeyToNYC@aol.