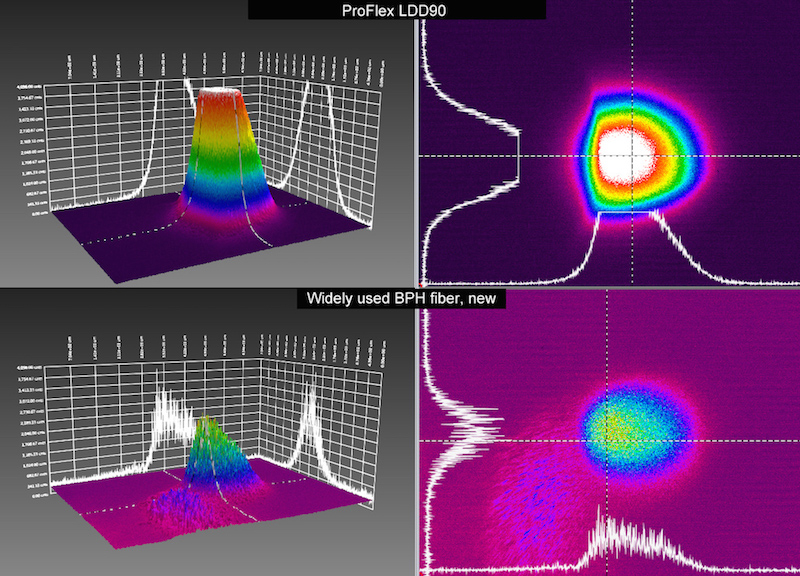 Most laser surgery for BPH uses a side firing optical fiber because the tissue masses (prostate gland lobes) surround the urethra through which the fiber gains access. Compared to standard axial delivery fibers, side-fire fibers produce highly divergent and distorted output profiles with up to 35% of the laser energy scattering at surgically useless angles. While laser surgery does offer greater precision in tissue removal than TURP, and far less collateral tissue damage, imprecise energy application does give rise to some complications.

The reduced surgical efficacy necessitates the use of excessive laser power and forces the surgeon to position the fiber very close to the target tissue, risking direct fiber to tissue contact. Tissues adhere within the low energy density fringes of the distorted output, heating the fused quartz to temperatures favoring devitrification and dissolution and pitting the output surface. Surgeons must also overcome the torsion of these almost millimeter diameter quartz fibers to aim the output, further reducing surgical precision.

Modern side-fire fibers use tips polished at the critical angle (for total reflection) of the highest angular modes within the fiber. This highest mode angle limits off-axis redirection to roughly 75° so the best case spot is an ellipse rather than a circle. Worse yet, the reflected energy must exit the cylindrical wall of the fiber and traverse an air gap before passing through the cylindrical wall of the surrounding quartz cap serving to preserve the necessary refractive index difference for the critical angle. These curvatures and refractive index transitions give rise to the bulk of the distortion and scatter. Past attempts at fusing the cap to the fiber output have largely failed; the fibers fracture in use due to residual stresses in the glasses that cannot be dampened by annealing (due to nearby and thermally labile fiber components).

Due to the low divergence, the new side-fire fiber may standoff from tissue, reducing inadvertent contact and the sharp edges of the output spot offer considerably less territory for tissue adhesion. With the direction of output determined by the orientation of the cap there is no fiber torsion to overcome in targeting tissues. Excess laser power need not be applied and collateral tissue damage may be avoided.