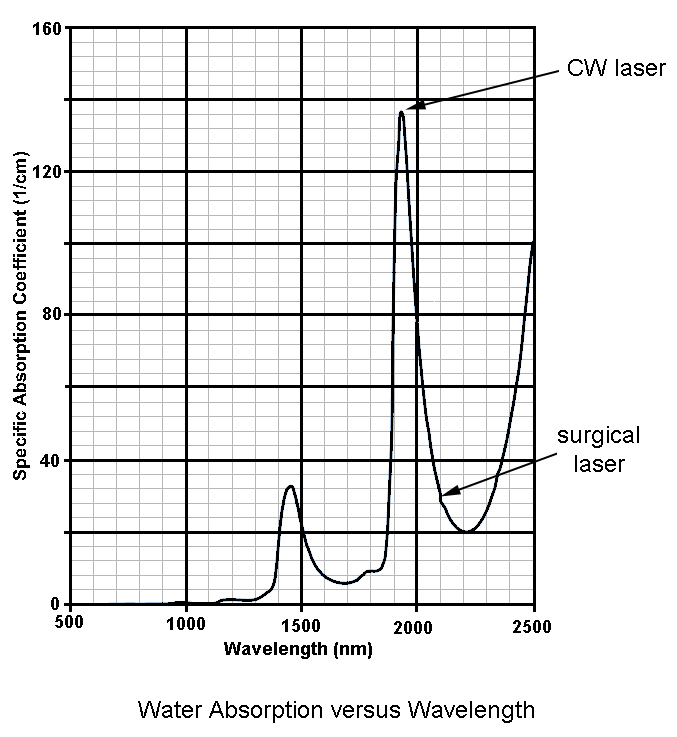 Use of holmium lasers to break-up kidney stones has grown steadily in popularity from its inception in the late 1980s. Small diameter, multimode optical fibers are threaded through a flexible ureteroscope through the urethra, ureter and into the calyx of the kidney and carry up to 50 watts average power in high energy pulses that break apart both hard and soft kidney stones. While it was an obscure surgical method 30 years ago, laser ureteroscopic surgery is now the dominant treatment due to a much better stone clearance rate and lower recurrence rate than ultrasonic interventions of the past.

The very reason the laser wavelengths (2080nm to 2140nm) work so well on hydrated kidney stones is also limiting to efficacy; the surgical saline used for flushing out fragments and keeping visualization of the surgical site clear also absorbs the laser energy strongly. Much of the laser energy is consumed in the “Moses Effect,” where a steam bubble is formed by the pulse front allowing the balance of the laser energy to pass to the stone. The extra laser energy heats the saline without any surgical benefit. In fact, the temperatures inside the kidney can easily reach 65°, burning the epithelium within the entire kidney. Worse yet, the rapidly forming and collapsing bubbles sometimes push the stone away from the laser or make the stone dance about like popcorn, making it very difficult to ablate and prolonging the surgery.

InnovaQuartz is developing a new laser that combines a continuous wave (CW) laser that emits less than one watt at 1930 nm within the optical fiber carrying the surgical energy pulses. 1930 nm is a peak of absorptivity for water such that the low power CW beam forms a stable “Moses Corridor” of steam between the fiber tip and the kidney stone, virtually eliminating loss of the surgical energy to boil water and preventing the pressure waves produced by rapid expansion and collapse of steam bubbles.

The CW laser is launched into the optical fiber at a high angle rather than on axis like the surgical pulses. In so doing, high order skew modes are excited in the fiber, producing a donut shaped output from the fiber at substantially higher angles than the maximum divergence of the surgical energy pulses. The ring beam of CW power places the highest intensity of the beam at the edges of the steam bubble where it is needed to maintain phase boundary between liquid water and steam, minimizing waste heat while enabling more rapid and efficient stone ablation.