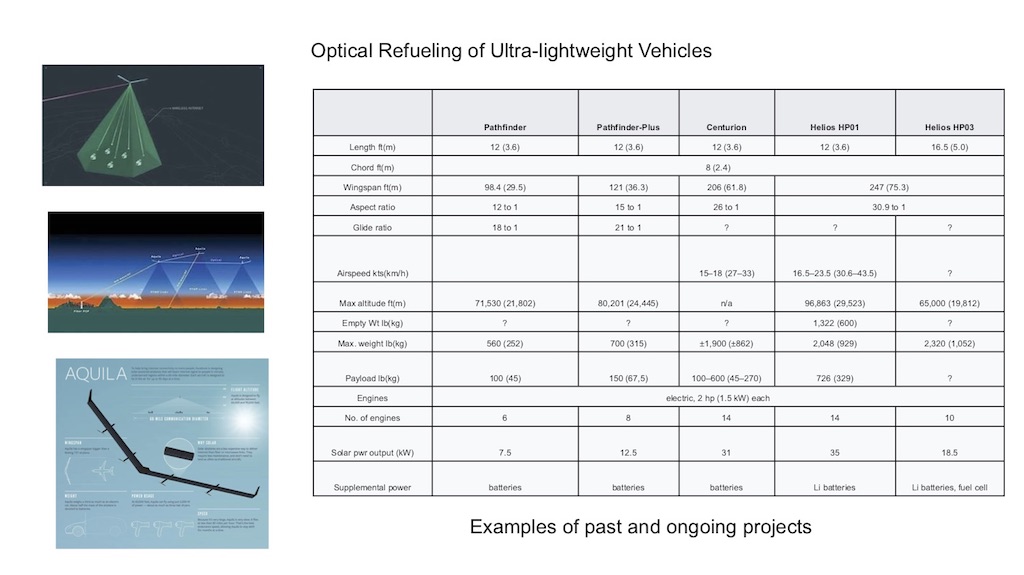 Ultra-lightweight vehicles are being developed to provide a number of high tech, long duration functions during flight. Applications including: military, weather, shipping, safety, commercial, border control, etc. applications. These vehicles typically are large, fragile, solar powered aircraft operating at between 50,000 and 90,000 feet for days to months timeframes.They typically have solar panels on the top of the wings and banks of batteries to store energy for night time operation. Usually > 50% of the vehicle weight is for batteries alone.

This approach provides a way to secondarily charge the batteries, along with significantly (40 to 60%) reducing the weight of storage batteries required for operation. Additional optical panels, designed for specific wavelengths (with up to >80% conversion efficiencies) ... 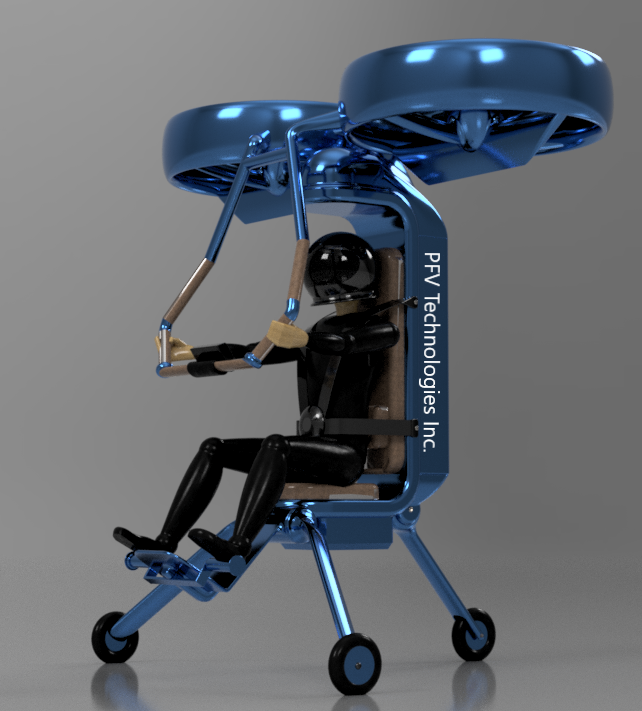 This is a design for a single person flying vehicle. This is an electric flying vehicle that uses two high speed counter rotating ducted fans to create lift. The fans are 36 inches in diameter. The estimated flight time is about 20 minutes with the current battery technology. The vehicle will be able to lift one 250 lb. person. The vehicle will be made using a combination of additive manufacturing for the core of the frame and other parts and hand layup of carbon fiber for the skin. By using this unique manufacturing technology the cost of manufacturing would be greatly reduced. Using the 3D Printed core structure would eliminate the need for molds and would save lots of ...

Proposed Architecture of a Space Vehicle Stealth Structure, based on a Novel Revolutionizing Geometry of Polyhedral Form 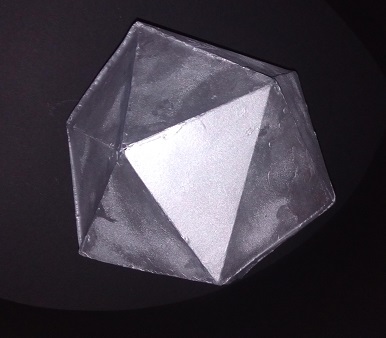 It is anticipated that the future shall need consideration of more frequent space travel and search for a possible more promissing environment for humans.

The Geometry of this work is part of my published book “Treatise on Circle Generator Polyhedron Harmony and Disharmony Condition of Three Concentric Circles in Common Ratio,”
ISBN 978 – 618 – 83169 – 0 - 4, National Library of Greece 04/05/2017 by Panagiotis Ch. Stefanides.
It concerns relationships of 3 Concentric Circles in Ratio to each other of 4/π
(for 4/π ... 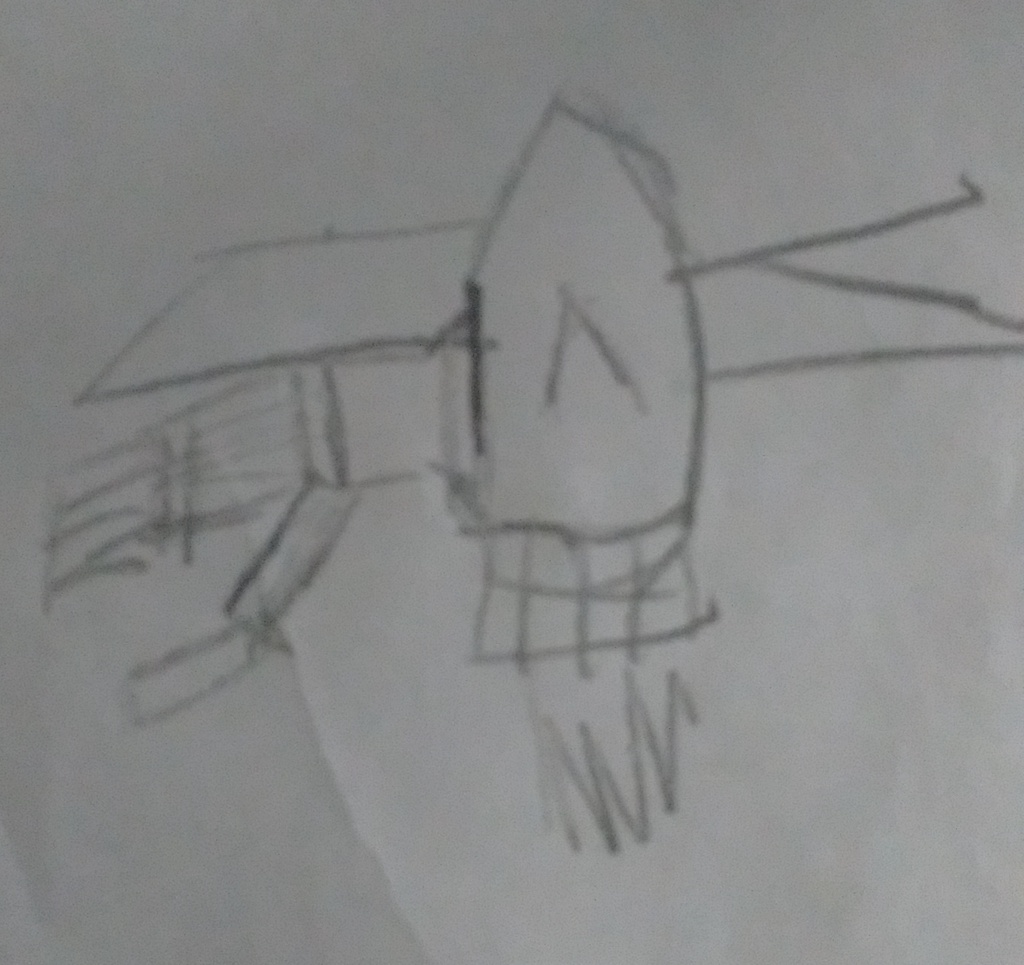 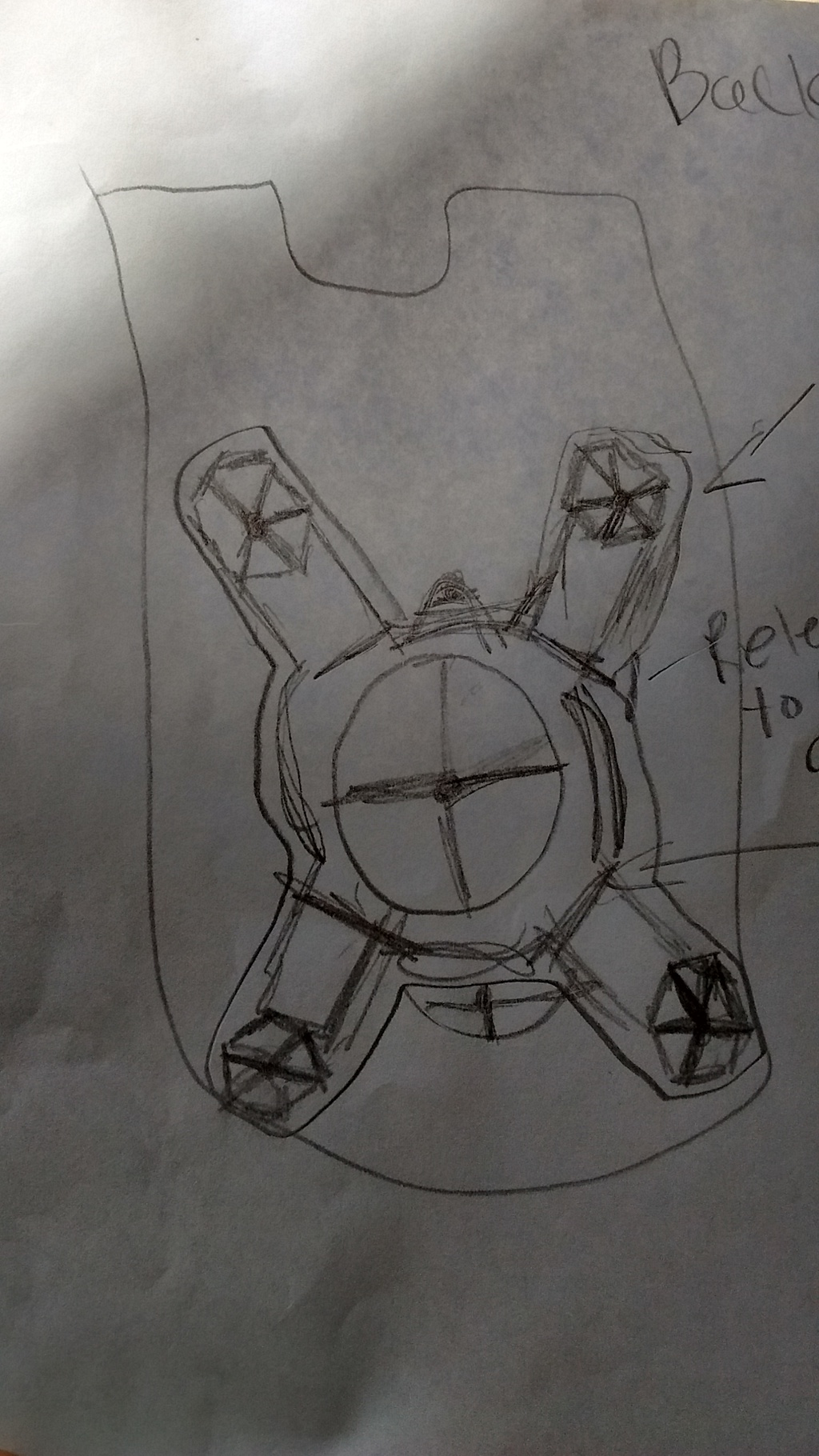 The SCOUT Tactile kevlar drone and drone docking vest is uniquely designed to accommodate/be formfitting to a specific personnel's back/body structure. A charging station that holsters/docks the drone "SCOUT" to the back/rear facing portion of the vest. A rechargeable battery block is installed in-between the vests materials' inner lining inside a concealable housing box consisting of the electrical components required. The outer lining consists of a soft cushioned material located on the mid back encapsulating the rechargeable/ejectable battery which also acts a structurized back support/brace for the mid to lower back to support the additional weight of the SCOUT/drone. The back/rear of the vest auto docks/releases the drone on voice or button command. SCOUT drone is equipped with 3d ...

It must be noted that in study of the properties of “space,” we also are including all possible locations that objects can occupy in the universe (ref.1).

I mean that, we are a part of the system that we want to study, as Quantum theory tries to express. To study the curvature of space, the minimum dimensions should be considered are three-dimensional. .So, in a three-dimensional space, it can move up, down, forward, back, left, and right.

Although near the Earth, space is only very weakly curved, but in the other regions there are much stronger than that because of an extreme gravity caused by black holes, (dark matter & dark energy); To have a ... 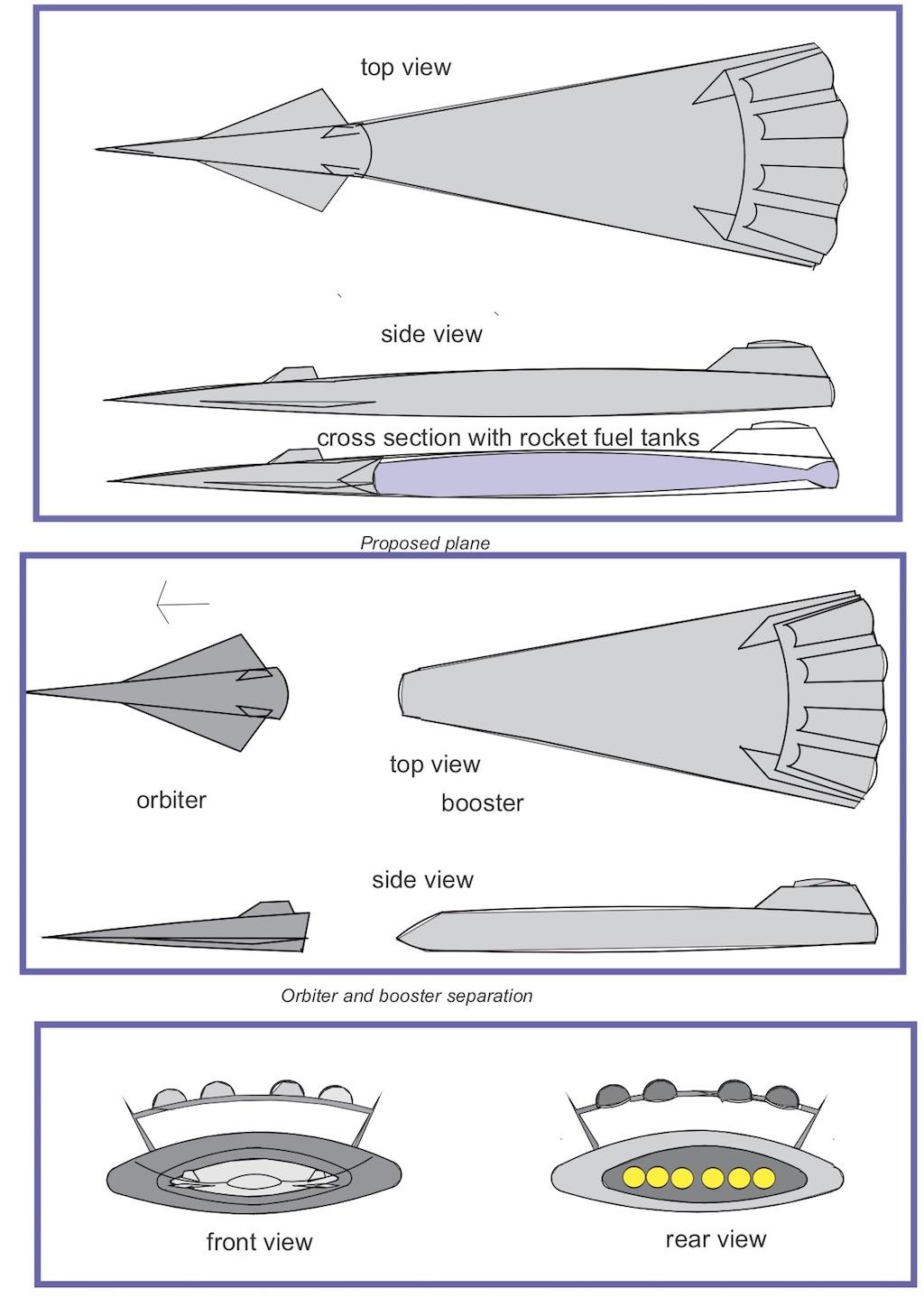 Following recent advances in aircraft design, a possible optimal solution for a spaceplan, to carry a payload in orbit could be a multibody vehicle, having the advantages of both the SSTO and the TSTO. Considering that 90% of the load is fuel, a conventional booster is basically a fuel tank powered by engines, while a spaceplane should be an aircraft, fully reusable, capable of horizontal takeoff and landing as a conventional commercial jetliner.

Goals of the proposed spaceplane can be summarized as follows:

-Horizontal aircraft mode for take off and landing

-Utilization of conventional landing strips at ... 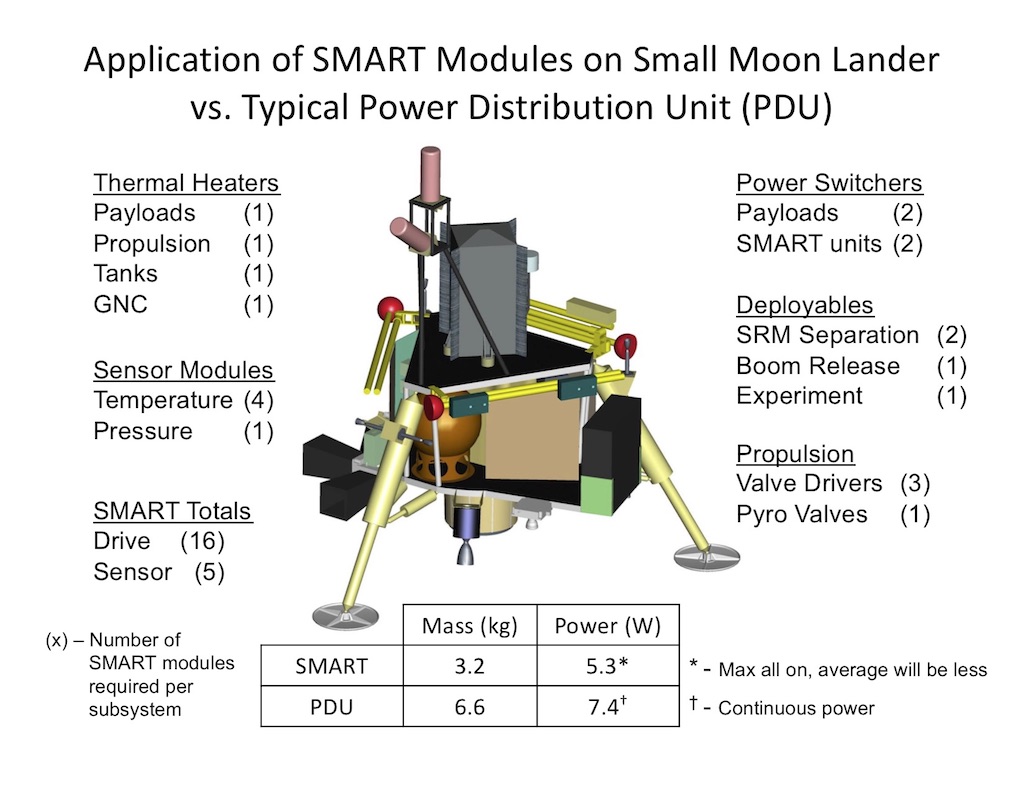 The current approach to space avionics development is to design each electronic drive or sensor signal conditioning circuit for a specific purpose. This approach slows the development cycle, produces large avionics systems and increases overall cost for flight systems. The process is similar to re-inventing the wheel each time, but updating only the material used in making the wheel. A novel avionics approach is necessary to meet the future needs of low cost lunar and space missions that require low mass and low power electronics. To meet this need requires an innovative, distributed avionics architecture, based upon two multi-purpose modules that can be individually reconfigured to drive and sense a variety of mechanical and electrical components. The solution is ... 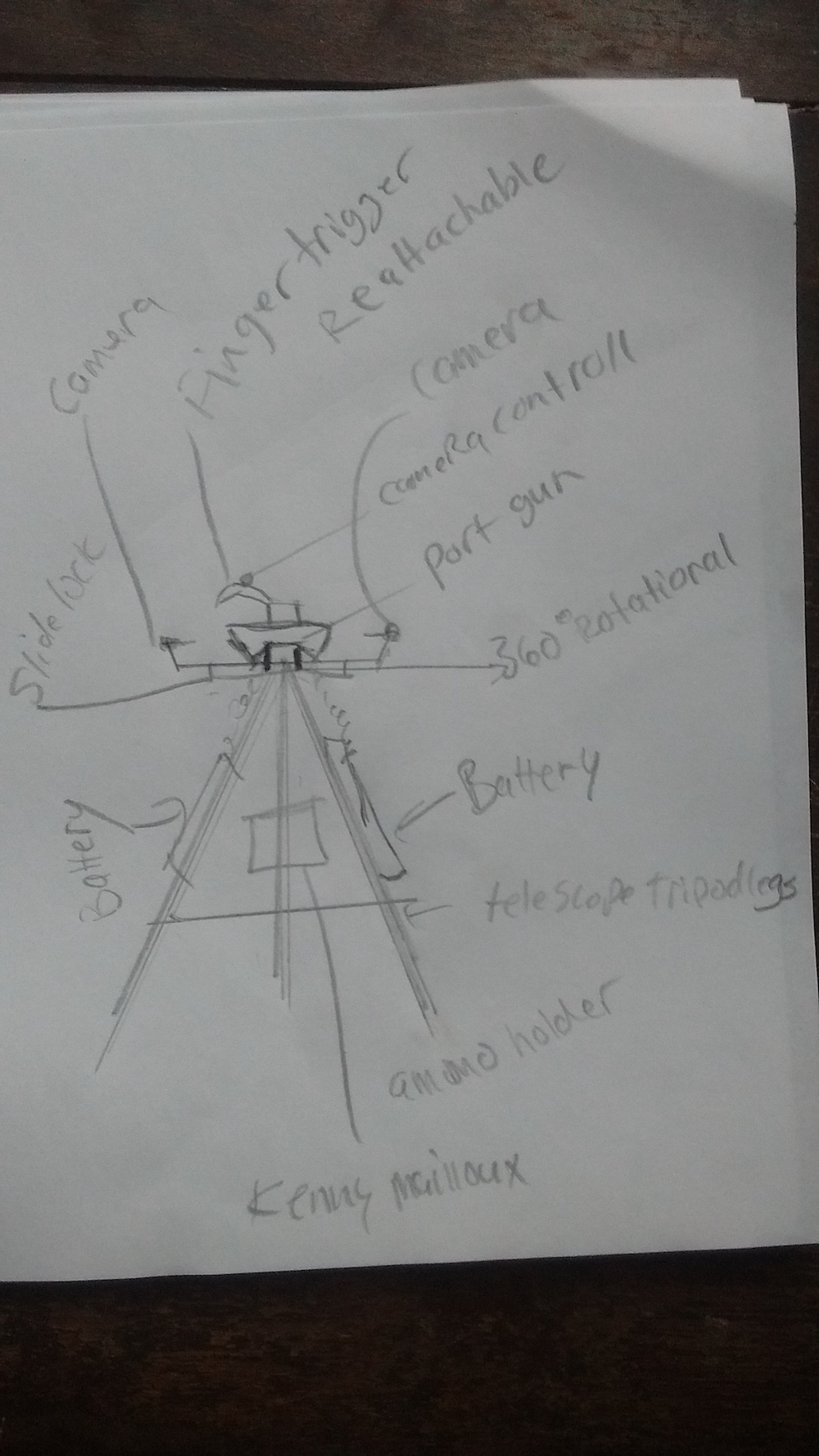 Smart reattachable control trigger turret tripod or the SRCTTT for short has a bidirectional form fitting receiving dock that can be minipulated to accept/port various reattachable weapons of selected choice. Once a weapon is docked using the slide lock function onto the SRCTTTs adjustable receiving dock/port the control trigger/"finger" press release activated control function manuvers and or rests in a locking/unlocking firing position. The tripods telescope legs have 2 battery attachments that are reattachable via a slide lock function which connect to the SRCTTT on opposite sides of the telescope legs. The third telescope leg is for a adjustable reattachable ammo box container to fit various sizes. The SRCTTT's sensory 3d cameras incorporate zoomable night vision, ultra violet and ... 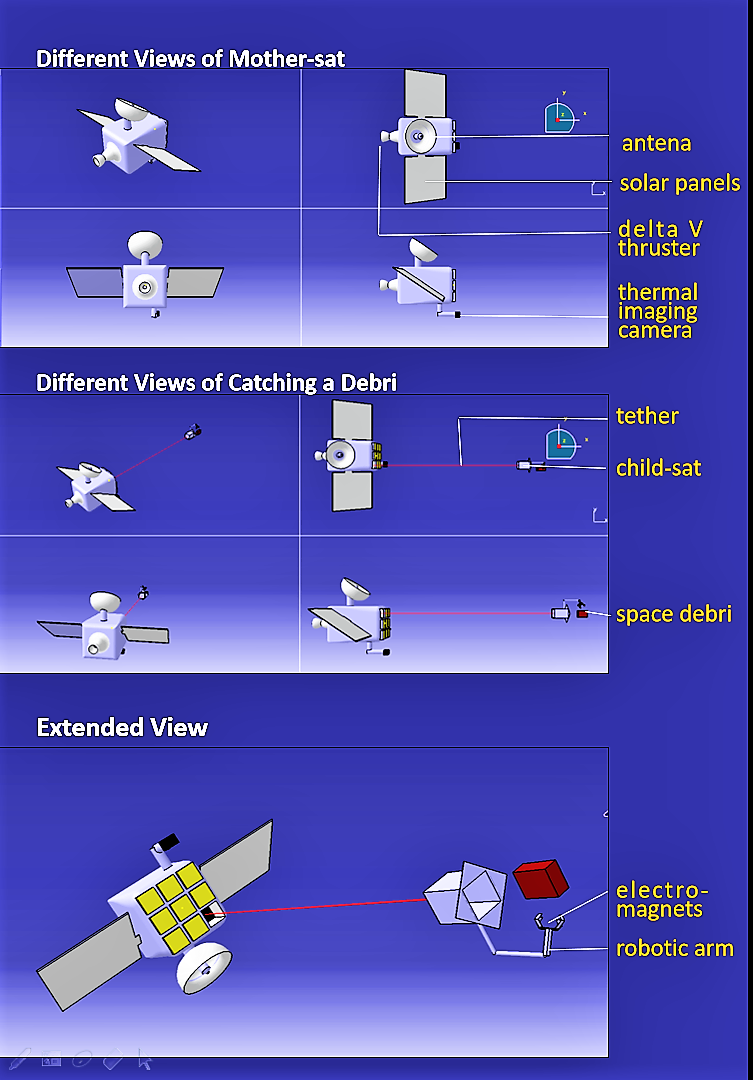 1-What is the unmet need we are trying to address?

-Kessler syndrome causes the exponential growth in numbers of formation of space debris. The Kessler syndrome causes trouble because of (1)domino effect,(2)feedback runaway exploration that occurs in higher orbits.
-These result in hostile action and collision of this debris with defunct satellites or space stations which results in catastrophic destruction.
-The speed of the space debris particles is like 10 times faster than a bullet so no one cannot get that. Also, the size of the debris is smaller than 1mm, so it may damage optics and solar arrays. So while a spacecraft may survive being hit by tiny debris, such hits can still result in catastrophe and mission ...